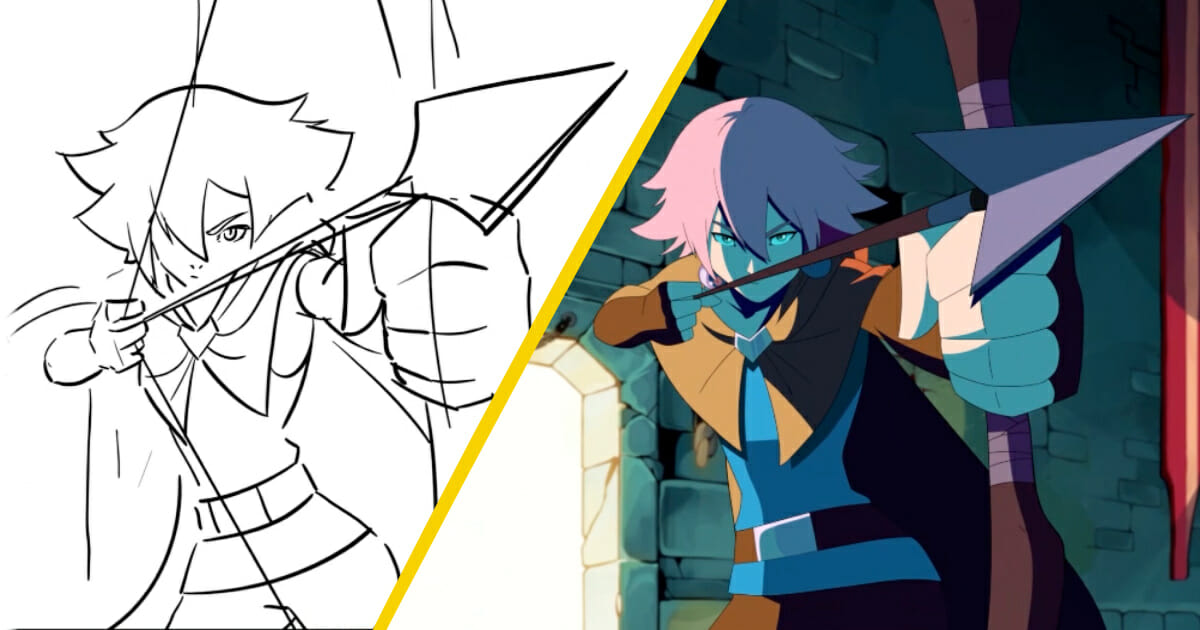 Animation is an integral part of the gaming industry: Animated assets are used within games themselves, as well as to promote them. Earlier this year, a trailer for the new game Sword of the Necromancer was released. It promotes this dungeon-crawler action RPG game in which you can revive your defeated enemies to have them fight alongside you. Sword of the Necromancer‘s trailer was created by Sunshine Animation Studio, a 2D digital animation studio based in Madrid, Spain which provides a range of services from pre-production to animation, colour and post-production.

We caught up with María Buitrago Vicente and Iván Carmona Marin, who founded Sunshine Animation Studio, to learn about their studio, the work that they do, and their anime-inspired animation style.

Can you start by telling us about your studio, Sunshine Animation?

We met in animation school, and went on to direct a project together called Elbion. It was the first time in our animation careers that we worked on every aspect of an animation pipeline for a project, because in school we had never drawn a layout or painted. Making Elbion helped us discover that we were able to make animated films from start to finish: everything from storyboarding to backgrounds and effects.

We loved the experience and the creative freedom of working on that project together, and wanted to keep doing it, so we created Sunshine Animation. Our studio specializes in 2D frame by frame digital animation. When the studio started out, we worked on different kinds of projects, from advertising to series and movies.

After doing that for some time, we learned that our preference was to work on short videos, up to 2 minutes long. We prefer short videos because they enable us to have a small team that’s involved in all stages of the animation process. The projects we typically work on now are for an adult audience, projects like trailers and cinematics for video games. We get to create many fantasy worlds with lots of action!

Could you describe the style of animation that Sunshine Animation tends to work in?

Our style is often described as anime, but I actually don’t think that’s an accurate description because the term anime refers to animation made in Japan. We watch anime movies and series all the time, and we’re very inspired by the style, so it’s fair to say that anime is a main reference for our projects. Other references include European animation studios that we admire, as well as specific artists. Our work is an amalgamation of those reference points and styles, mixed in with what comes to us naturally when we draw.

How did you use traditional digital animation techniques to create anime-style animation?

Our animation has an anime look to it because we use limited animation. This means we don’t use a completely new drawing for every new frame. Instead, we mix and match parts, which is why our animation doesn’t have that smooth look to it. Despite this approach, we never use puppets or cut-out animation. Everything is drawn from scratch!

Another technique that contributes to the anime look is that in Sword of the Necromancer we used a thin black line for the clean up. And, when we were making the animatic, the camera compositions we chose and the fast paced action scenes were a reference to anime.

What was most technically challenging about creating these scenes for Sword of the Necromancer, and why?

The most technically challenging about the Sword of the Necromancer trailer was probably the compositing of the camera movements. In video game trailers, showing as many characters, enemies, locations and game mechanics as possible is important. To do this, we have to come up with fast and seamless transitions.

How is animating in an anime-style different from other styles of animation?

The main difference is that production times are faster than they are with full animation. For example, we know that for the movie Klaus, cleaning a shot could take more than a week. For comparison, cleanup typically takes us just a day or two per shot. This is because limited animation has less frames.

What tips do you have for animators who want to work on anime style projects, or animate in anime-style?

Start by analyzing anime carefully. Watch anime videos that you like, and observe what it is exactly that you like about them. Is it the characters, the sakuga scenes, or the composition? Once you have a clear idea of what it is about the style that you love, it’s much easier to replicate. From there, practice! Especially when you’re just starting out, draw as much as possible.

And lastly, don’t limit yourself by aiming to replicate anime perfectly. Instead, consider mixing in different styles and references from around the world. This is fun and creative to do, and when you mix styles, you can create one that is truly yours.

Do you think that anime is becoming more popular amongst a wide audience, and if so, why?

Anime is definitely becoming more popular. I recently read about a survey that Crunchyroll ran in the United States to look at how many people know about anime, according to generation. The survey found that amongst Gen Z, only 6% of people don’t know anything about anime, whereas amongst Millennials, 27% didn’t know much about anime.

I think it’s becoming more mainstream first, because of access. With the internet, more people than ever are able to watch anime content (with subtitles!). I think it’s also becoming popular because it covers such a wide range of genres and themes. You can always find an anime you’ll like, whether you like horror movies or romantic comedies.

How does the process of animating for game promotion differ from other projects?

When you work on a movie or a series with a large team, your style is adapted to the style of the entire team so that the animation is consistent. And, when you work on large teams, you typically choose one field to focus on within the production process.

We enjoy working in game promotion because the productions are small and there is a longer lead time than in advertising. And, we have a lot of artistic freedom, even when art has already been designed for the game. We also just really enjoy working with the clients we encounter in game production. Game developers love their games like they are their babies, and so we always feel so honored to be trusted with sharing their vision and creating a trailer that promotes it.

Can you tell us about an exciting project that Sunshine Animation has coming up?

We have a trailer release coming up in August that we are looking forward to! I can’t share any details about it right now because it’s a confidential project. But I can tell you it’s the biggest and most complex project that we’ve created so far. It’s really leveling us up as a studio! We can’t wait for you to see it.

Interested in summoning more anime-styled game cutscenes from Sunshine Animation Studio? Be sure to unearth our previous interview about their work on Temtem’s 2D animated intro.

Sardine Productions is a boutique animation studio based in Montreal, Quebec. Founded in 2002 by Ghislain Cyr, it develops distinctive original content f ...