#ToonChat is a recurring event where animators and artists gather to discuss topics on Twitter on the last Friday of the month from 6-7PM EST.

The topic of this month’s #ToonChat discussion is Animating for Music Videos. The guest experts joining us will be Esteban Valdez from Echo Bridge Studio as well as India Swift and Michael Doig from Knights of the Light Table.

The conversation will include the following discussion topics:

If this is your first time participating in a Twitter chat, here is how the format works: Users meet on Twitter on Friday July 26 at 6PM EST using the #ToonChat hashtag. Over the course of an hour, our account (@ToonBoom) will pose six questions (numbered Q1, Q2, Q3 …) to prompt responses from our chat participants. Be sure to include the #ToonChat hashtag in all your posts to make it easy for other participants to discover your comments. Respectful discussion between participants and our guest experts is always encouraged.

Echo Bridge is an award-winning animation production company and studio specializing in 2D, hand-drawn, animation for commercials, music videos, video games, educational and explainer videos, television shows, feature films. The company was founded in 2010 by veteran animator, Esteban Valdez, in St Petersburg, Florida. Echo Bridge’s animation credits include Sugar and Toys, and they recently animated a music video for Pink Youth, by Yuna, Little Simz. Esteban Valdez (@echobridge) will be joining us in this month’s chat.

Patrick Stannard founded the Knights of the Light Table in 2017 with trusted friends and animators around the world. Having worked with Dublin-based British animator India Swift previously, Stannard invited her to be the director on an animated music video for TWRP’s Starlight Brigade. Swift’s partner, Scottish colourist Michael Doig, joined her as the project’s art director and the rest of the eight-person team formed from there. India Swift (@OldSwifty) and Michael Doig (@MichaelDoigArt) will be joining us in this month’s chat.

Be sure to join this month’s conversation using the #ToonChat hashtag. 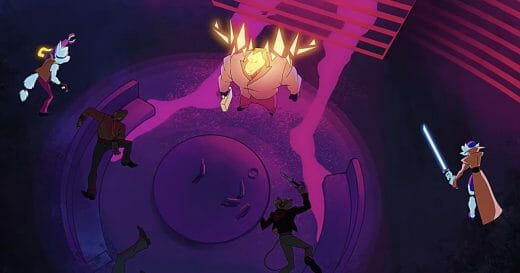