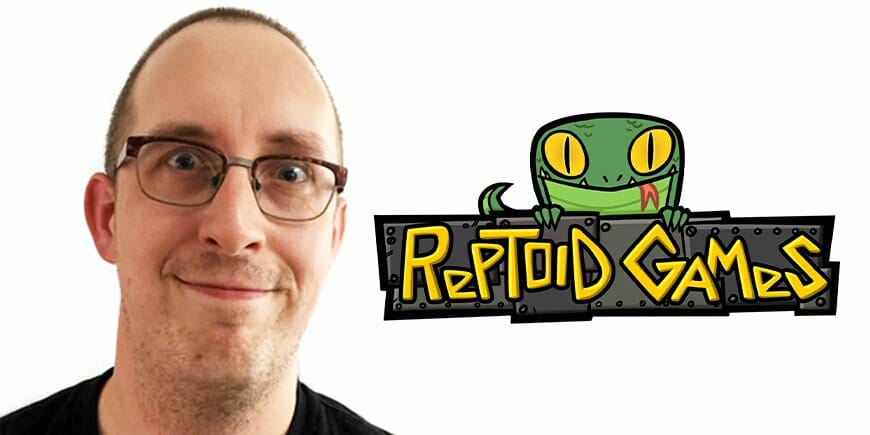 With the $270 billion global animation industry booming, artists have never had more choice in terms of the work they can do. Thanks to improvements in software, many 2D animators are increasingly applying their creative talents to video games. Among them is Simon Paquette, CEO and creative director of Reptoid Games.

Prior to co-founding Reptoid with business partner Ryan Miller, Paquette had over a decade of 2D animation experience in some of Canada’s most renowned studios working on series for Nickelodeon, Netflix, DisneyXD and more. So how did he go from directing shows like Wild Kratts and Ever After High to running his own video game production company?

Level 1: From drawing to directing

Paquette grew up in Ottawa, Canada’s capital and a thriving animation hub. His journey began with a childhood love of drawing, a talent nurtured by his parents, who both happened to be animators.

“My parents were always very supportive of whatever I wanted to do,” Paquette reflects. “ I think they were very careful not to push me toward animation specifically, but as a kid I had hole-punched animation paper and Col-Erase pencils instead of crayons — so I think I got hooked pretty early on!”

He enrolled at Algonquin College’s celebrated animation program after high school, which his father incidentally helped found. While the school is now a Toon Boom Centre of Excellence, there were barely any digital tools when Paquette attended in the early 2000s.

His first job after graduation was at Mercury Filmworks, which was the only studio in Ottawa using Toon Boom software for animation production at the time (Concerto, an early predecessor to Toon Boom Harmony).

”My first day walking through the studio I saw that the other animators all had paper storyboards on their desks and I was really worried about my ability to draw such detailed characters,” recalls Paquette.

However, he quickly learned the benefits of puppet animation — particularly how it allowed him to focus on the movement, acting and performance of his characters. In his five years at Mercury Filmworks, he rose up from animator to director on Jimmy Two-Shoes.

Knowing he needed to move on to continue growing, he took on roles at Ottawa studios Big Jump Entertainment and Kratt Brothers Company. Toon Boom software became invaluable in his daily work as it was often necessary to edit animation created by multiple artists, each with their own different process and workflow.

“With other software it’s easy to get drawn into a corner where you just need to redo the work if there’s a big problem that comes up; with Toon Boom, I feel like I always have a way to backtrack or pull things apart to find a solution,” says Paquette.

Having worked his way through various roles and departments at Ottawa’s biggest studios, Paquette wanted to see how production companies and artists in Toronto were using the software. In 2013, he accepted a position at Guru Studio and made the move.

Guru Studio had recently adopted Toon Boom Harmony and Paquette was hired specifically because of his background with the software. The studio needed help establishing its pipeline for a new, technically challenging series and he began working alongside its head of 2D, Chris Fourney.

Over his career, Paquette found company leadership was often divided between creative and production. He became disillusioned with the binary, wanting to oversee both the artistic vision and influence the operational aspects like department sizes, schedules and planning. The only people who generally had this level of say were studio owners.

While in Toronto, Paquette reconnected with Ryan Miller, an old colleague from Mercury Filmworks who had taken a teaching position at Durham College in nearby Oshawa. The two had similar ideas about management and how companies should work as well as a shared feeling of limitation in their careers. After much discussion, they decided to start their own business together in 2015 — and they focused it on video game development.

And thus, Reptoid Games was hatched. Video games felt like the right move as the pair had observed indie development thrive between 2005 and 2015. They were 100-percent committed, quitting their respective jobs to work full-time on their new venture.

Speaking on the transition from television series to video games, Paquette explains, “I had to get a lot better at animating cycles. In games, everything needs to be able to loop continuously, and blend seamlessly into other motions. I also learned that games have almost no time for anticipation, it was important to create a realistic sense of weight and movement with only one or two frame anticipation or no anticipation at all.”

Paquette notes that in the same way Toon Boom Harmony had empowered television animation to make massive strides, Unity and Unreal allows small teams to achieve huge levels of innovation — creating their own IPs that would be critically acclaimed and sell well, all on their own terms and working directly with clients. By contrast, doing a television series requires going through a broadcaster, often involving lengthy pitch processes.

“When we first started the company, we didn’t have an idea for our first game so we decided to do week-long prototypes; on Monday, we’d brainstorm an idea around a whiteboard and then spend the week drawing art, creating prototypes and putting something together. On Friday, however far along it was, we’d put the game away and start something else the next week,” explains Paquette.

By the fifth week, they landed on Fossil Hunters — a 3D action-adventure game released in February 2018. While Paquette initially wanted to animate it in Toon Boom Harmony, there was no SDK at the time for exporting to Unity in 2015. However, Reptoid would continue using the software for other projects, including the World of Peppa Pig app.

Additionally, its team used Toon Boom Storyboard Pro for Speax, a Canadian app to learn French via storytelling and interaction. By using the industry-standard planning software, Reptoid was able to map out a variety of branching options and visuals almost as if they were animated scenes. Miller also created a script that could take drawings in Storyboard Pro and bring them directly into the app.

“We basically had interactive animatic files we were playing with and putting the storyboards directly into the game engine,” says Paquette. 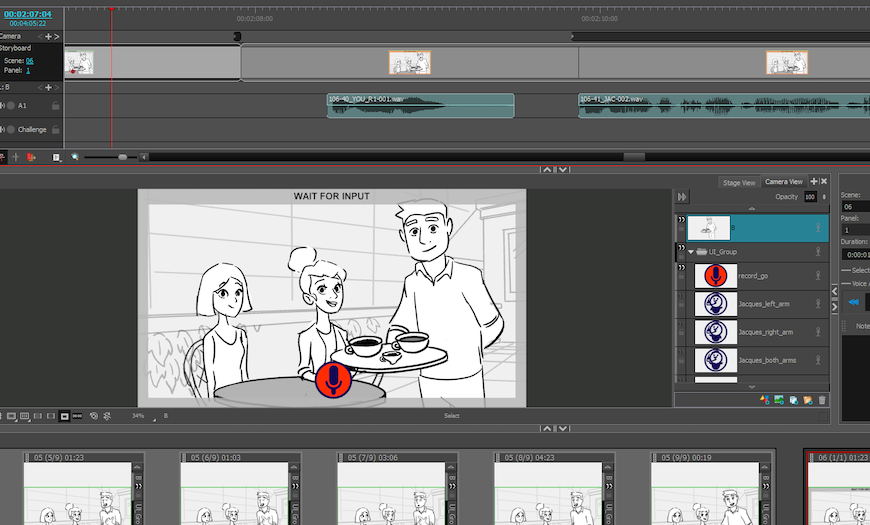 He continues, “Because I was working with Storyboard Pro, I was able to build all the variations into a single storyboard file, but when there were changes I could still export all the separate clips with their audio directly into the game engine for playtesting. Without Toon Boom I don’t know how we would have kept track of it all — it would have been a nightmare.”

Level 4: The future is all fun and video games

In December 2018, Reptoid started work on an unannounced narrative/puzzle game that combines video game and animation components. The choice of solution was obvious.

“We needed a tool that would let us do production-level TV animation with expressive 2D character acting, but at the same time we would need dynamic animation for gameplay that still matched the same style and quality level. This seemed like an obvious time to get back into Harmony,” says Paquette.

The timing could not have been more perfect as Double Stallion Games had just released Speed Brawl, and Reptoid was able to connect with them about the SDK they created for Harmony and Unity. Speaking of the initial animation, Paquette says, “Toon Boom is in a great position to lean into the challenges of video game development, which is really great.”

Given how technology has improved (and continues to), Paquette is now able to live out his animation ambitions of overseeing both the creative and operational aspects of his own studio. With four full-time staff and new projects in the pipeline, Reptoid Games will only keep levelling up — and Toon Boom software is growing with it.

Want to try something new in animation? Find free tutorials on the Toon Boom Learn Portal! 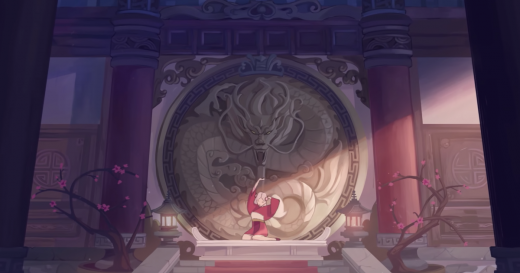 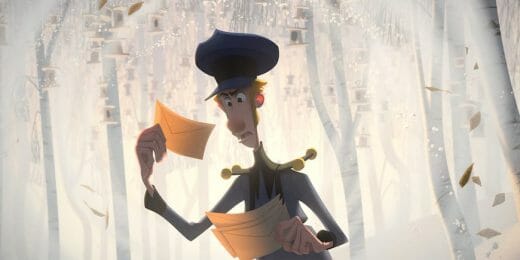 Top Animation News is a weekly column that rounds up the biggest, best and breaking stories from the animation industry. This edition covers January 24 t ...