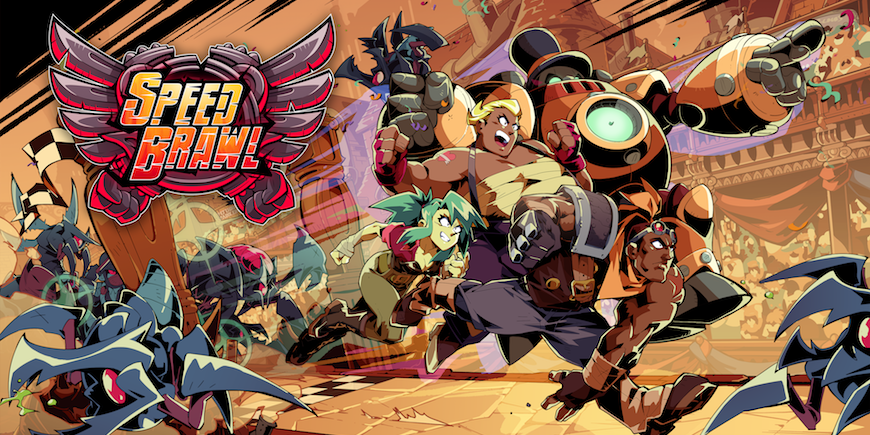 The video game industry has never been more popular — and saturated. Market research firm Newzoo reported the industry will attract nearly $138 billion in 2018, a 13.3 percent year-over-year increase according to “CNBC”. With players deluged in 3D options, a growing number of developers are (re)turning to 2D video games for novelty, nostalgia and new avenues of artistry. Among them is Double Stallion Games.

The Montreal-based indie studio has established itself as a leader in the growing movement of 2D animated video games. Double Stallion Games released its first title, Big Action Mega Fight!, in 2013 and had sophomore success with OK, K.O.! Lakewood Plaza Turbo!, in collaboration with the Cartoon Network. Both were praised not only for their gameplay, but also their hand-drawn 2D animation aesthetic.

Now, the studio is adding the final punches to its latest release: Speed Brawl. The hand-drawn 2D game’s look is somewhere between anime and antiquated, combining the exaggerated features of Street Fighter-style character design with visual cues from its 19th Century storyline. The disruptive, dynamic result is timelessly cool and sets Speed Brawl apart from the largely 3D medieval and sci-fi-centred titles dominating the market.

Set in an alternate-history version of Victorian-era Britain, Speed Brawl’s story and style were conceptualized by Double Stallion’s art director Eric Angelillo and Thomas. Instead of colonizing the world, the British Empire went to the moon and waged war with its alien inhabitants, the Selenites. With Her Majesty’s army winning the conflict, the drone-like species was enslaved and put to work on Earth — kickstarting the Industrial Revolution and freeing man to pursue higher callings.

Naturally, the human population became bored, restless and delinquent. (Cue: social commentary.) In order to placate the masses, a blood sport —the eponymous Speed Brawl— was conceived, pitting the bravest, strongest humans in fights to the death against the Selenites.

In order to level up its high-quality hand-drawn art style, the studio needed a digital animation solution with plug-and-play ease of use and cohesion with Unity engine. Having done its previous titles in Flash, it turned to Toon Boom Harmony to keep production on-time, on-budget and aligned with the 2D animation it is known for.

“Every time we start a new project, we want to one-up our animation process and tools. We were running into some limitations with Flash. Because I had worked with Toon Boom animation software in the past, I knew it had more options and flexibility. I was curious to see if those things could be applied to games,” Angelillo tells us.

He continues, “Our goal was to keep the hand-drawn look, but we needed to get that to be more efficient. In the end, we got a sort of hybrid of frame-by-frame and cut-out animation. Toon Boom Harmony really helped us achieve that.”

Angelillo and his team of two other animators received training from Toon Boom experts directly. Also, the two companies’ engineers produced new plug-ins to create a more seamless pipeline with Unity. These investments in tech will continue to pay off for the studio’s next projects.

Besides its exceptional hand-drawn animation style, Double Stallion Games sets itself apart from other indie game developers by maintaining a team of in-house artists, with outsourcing only done strategically. This talent, along with the tools in Toon Boom Harmony, has enabled it to maintain and grow the quality of its output with Speed Brawl. Throughout production, its team found the animation software’s palette swapping useful as it allowed them to change its six playable characters’ colours and costumes quickly — something lacking in Flash. 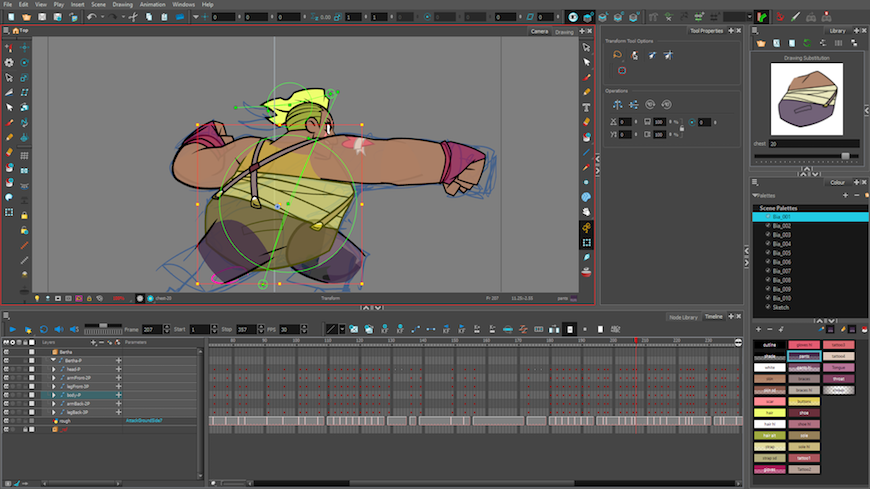 Most paramount though was Harmony’s ability to export sprite sheets. In Flash, Double Stallion’s team was only able to export traditional sprite sheets, which were huge and heavy PNG files. This became problematic when work began on Speed Brawl, where the characters have even more animations than its previous titles.

“The way Harmony exports, it splits all the parts like the hands and forearms and hair pieces; in short, you don’t have to redraw the whole character when it’s in a different position. Harmony recognizes that it’s reusing a hand, for instance, and it’s just being rotated differently,” says Angelillo.

This allowed for more efficiently packed sprite sheets, which helped the game run at 60 frames per second. Their smaller size also meant they were compatible with the parameters of consoles like PS4 and Xbox, opening up new opportunities for Double Stallion. Additionally, by being able to produce their own sprite sheets, artists were much more involved in creative production instead of just handing off their drawings to engineers.

Double Stallion was also able to export assets it had already created to Titmouse Animation, who produced Speed Brawl’s fully animated trailer and thus eliminated the discrepancy between the video and actual gameplay. Many of the background characters in the promo were taken directly from the game, which is unusual, if not unheard of.

The technology and assets Double Stallion developed over the course of Speed Brawl’s production will also be reused on its upcoming endeavours. It already has two games in mind, both of which will be animated in Toon Boom Harmony.

In the meantime, Speed Brawl is looking at a planned end-of-summer 2018 release and will be available on PC (via Steam), Xbox One, PS4 and Nintendo Switch. It has all the ingredients of success: innovation through its art style and a never-before-seen physics engine and combat speed, plus its unparalleled hand-drawn aesthetics. Following in the footsteps of Cuphead, offerings like this have the potential to attract even more 2D animators from film and television into games.

Angelillo’s advice to them is, “Keep in mind that using Harmony for film production and using Harmony for games, the process is not the same. You don’t have to unlearn everything you know, but you should be open to a new workflow.”

Top Animation News is a weekly column that rounds up the biggest, best and breaking stories from the world of animation. This edition covers June 22 to 2 ...