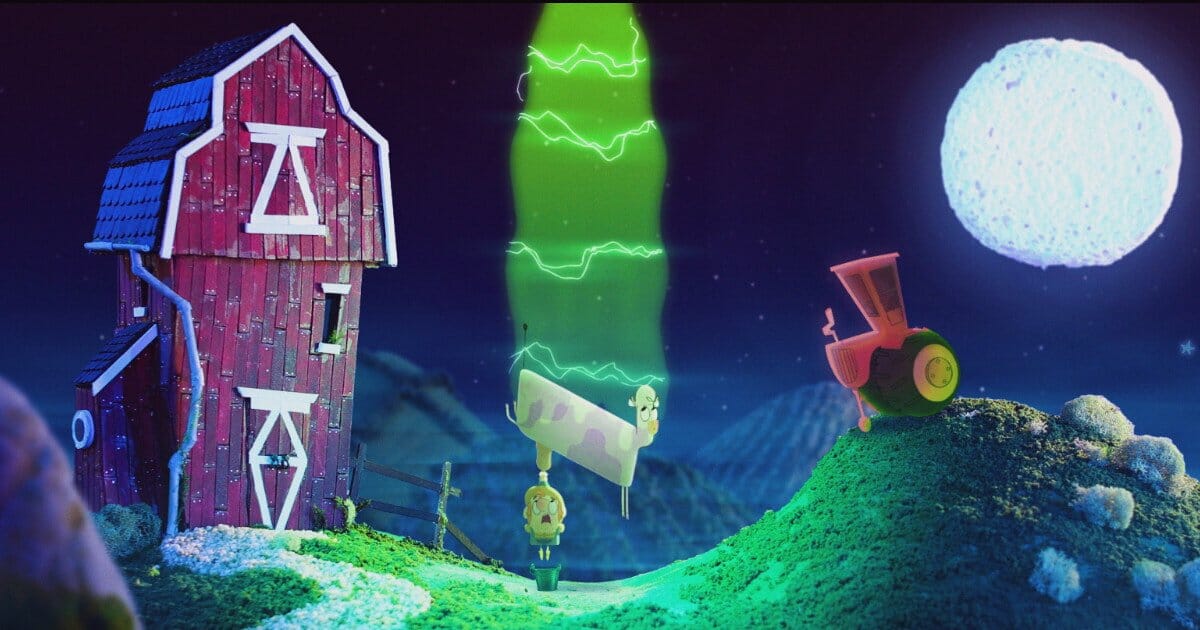 From Independence Day to A Grand Day Out, tales of the extra-terrestrial have always captured our imagination. While alien life-forms and encounters with distant civilizations provide great inspiration for animated films, they also pose unique challenges for their animators. Joe Sutherland and his team have risen to that task with their otherworldly new short, Cows Come Home.

Mixing traditional hand-drawn animation, 2D rigs and modelling — brought to life using Toon Boom Harmony’s powerful features — this minute-long burst of action pays visual homage to the beloved B-movies and schlocky sci-fi’s of yesteryear. Is it time for aliens to make a comeback? We got in contact with lead animator Joe Sutherland to learn what goes into making a small saga of such planetary proportions…

As an animator, what is it about extra-terrestrials and alien abduction that compelled you to make this film?

Joking aside — animation really is limitless, so why not utilize the medium to its true potential and make something completely out there without being held back by reality? Let’s be honest, aliens are just fascinating.

I understand that the film was made through a mixture of mediums, with hand-drawn characters inhabiting a physically modelled set. Can you tell us more about this approach?

It started with a brainstorming session in a well-established food chain. We essentially came up with ideas for the story and the unusual medium simultaneously, rather than one being an excuse to do the other. It felt very organic to tell this story in this particular way.

I must confess, the characters weren’t fully hand drawn. It was a mix of Toon Boom rigged puppet animation and some traditional drawings drawn over the top. Alongside this, we were building a real set, which was also a first-time experience for all of us. The initial ideas pitched led to character designs and backgrounds, to help visualize the world. After that, we did a lot of trial and error with cardboard mock-ups, animatics and test shoots. The 2D animation was then merged with footage from the tangible set in Toon Boom Harmony, creating a world you feel you can touch.

Tightly scheduled, much like a full production, we had many plates spinning at the same time with everyone doing their part before we brought it all together in the compositing stage. The process of making this film was a huge challenge, but I think we came away with a piece of work we are all proud of. 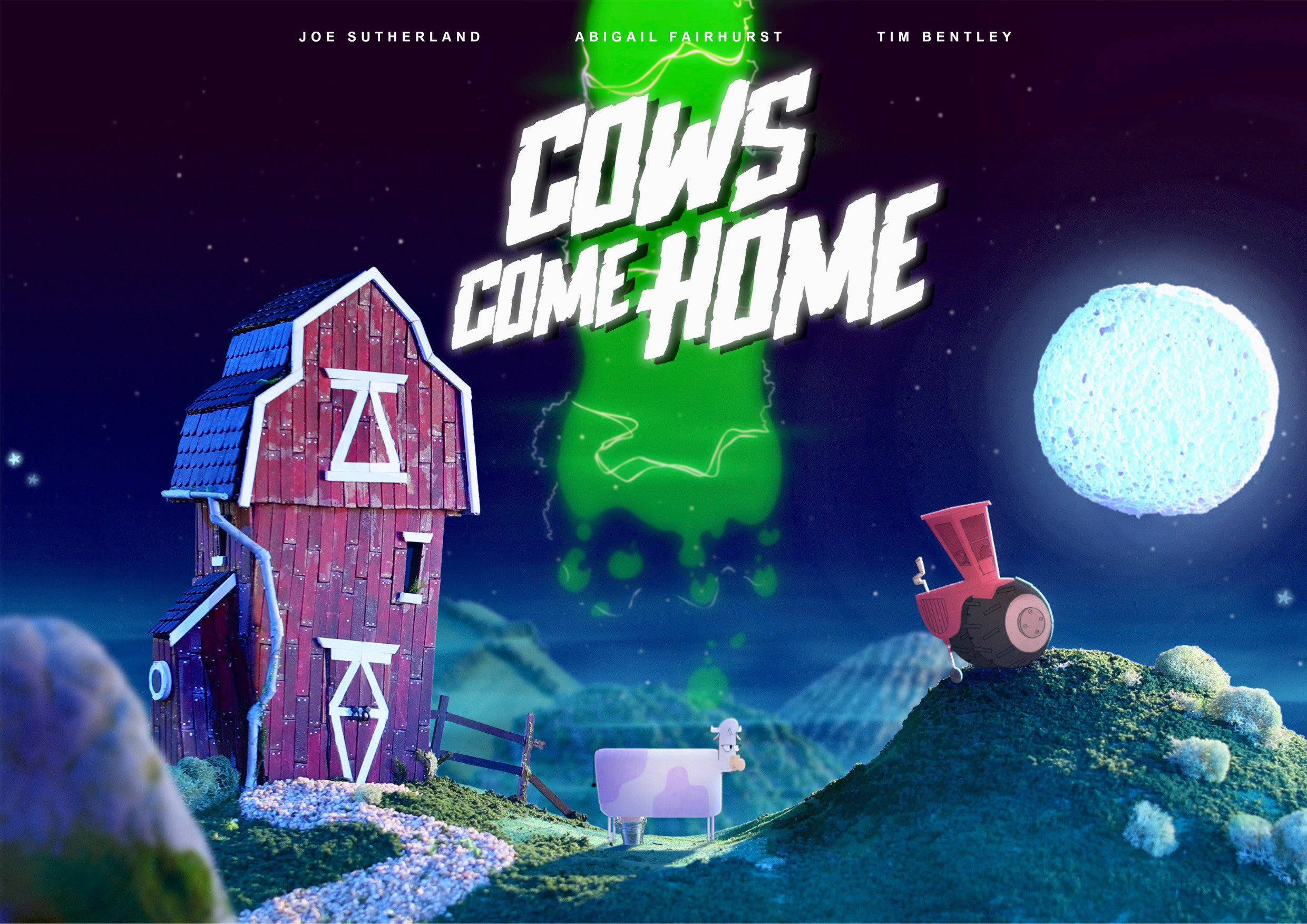 Were the decisions here mainly stylistic, or technical?

Honestly, both. Many decisions went hand-in-hand. A lot of them were led by the one-minute time limit we gave the short. Due to this, we had to consider many factors for this condensed film. For example: Is it possible to have a detailed narrative? Should there be more than one location or scene?

During this process, we realized that for us, the quintessential factor was style! The time restraint could have been a hindrance. However, we turned this one-minute limit into the driving force behind the idea and realized the film should be visually engaging at first glance to catch the audience’s attention, hopefully.

Were there any specific advantages or disadvantages you found in working in this way?

The fact that 50% of the film did not have the option of Ctrl-Z or undo! Once the materials had been bought, the set was built and the glue had dried, there was no way back. We just had to be thorough in our planning, which is quite difficult when you’ve never done this type of experimental animation hybrid before. However, this also gave us the inspiration and motivation to push ourselves whilst having fun making it!

What can you tell us about your team on this project? Who did you work with and who was responsible for what?

The team consisted of a variety of talented people from different backgrounds and identity representations, with many years’ experience in the animation industry working with clients from Disney to Nickelodeon and Universal to Netflix.

All of us had experience in our specific roles apart from Abigail Fairhurst who took on the exciting challenge of Lead Set Build. I took on the role of Director, Designer and Animator. James Cox rigged the characters allowing me to animate, Ali Shakir animated the absolutely stunning UFO beams and effects, whilst Tim Bentley created the animatic and pieced everything together in comp, adding the polish. 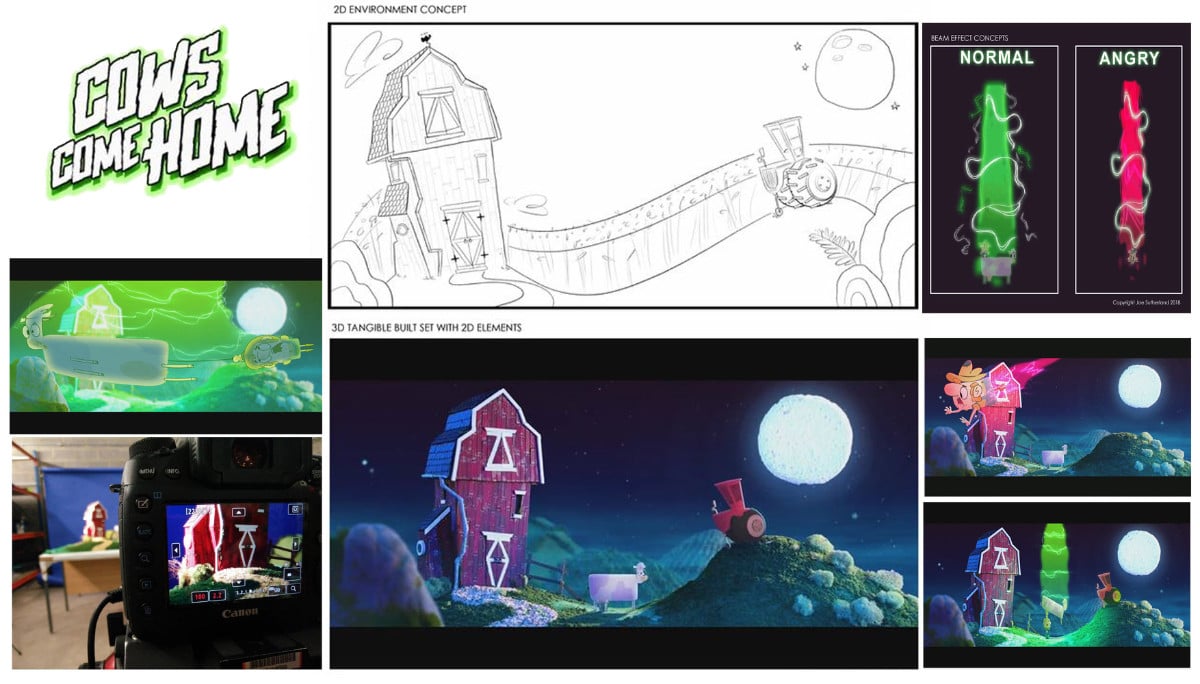 How long did this project take? What were the most time consuming or challenging aspects?

From initial concept to designing and developing the idea, tackling the set and animation, and adding the finishing touches, took 4 months — due to everyone having day jobs and time schedules. Surprisingly, one of the most time-consuming parts was collecting all the products we needed and turning them into elements for the set. But nothing was more time consuming than agreeing on a title for the short.

The team tackled so many new challenges, we must confess we made a few mistakes and had to learn from them. For example, making a set farm is particularly challenging as you must figure out how to make miniature versions of things you see in day-to-day life. It makes you look at the world in a ‘Honey, I shrunk the kids’ kind of way. For example, we realized to be able to make the grass we had to put green material in a blender to refine it enough or to build the barn we had to individually paint wooden lollipop sticks and crack them like wood.

However, the biggest challenge was fear! The fact that we didn’t know, after all this work, how it would turn out till it was all pieced together! We could create concept after concept and imagine as much as we liked, but we wouldn’t know for certain if the 2D characters would merge well with the set till it was done!

What were some sources of inspiration on Cows Come Home, both in terms of design and visual storytelling?

This might be a bit of a curve ball. Initially, I wanted to be a stop-motion animator but ended up in the land of 2D. So, I took this opportunity to merge my two favourite mediums. Since we wanted to create something we had never attempted before to push our creative limits. In terms of animation inspiration, I’ve always been a fan of snappy and limited frame animation and took inspiration from so much content, but specifically the Mickey Mouse Shorts. 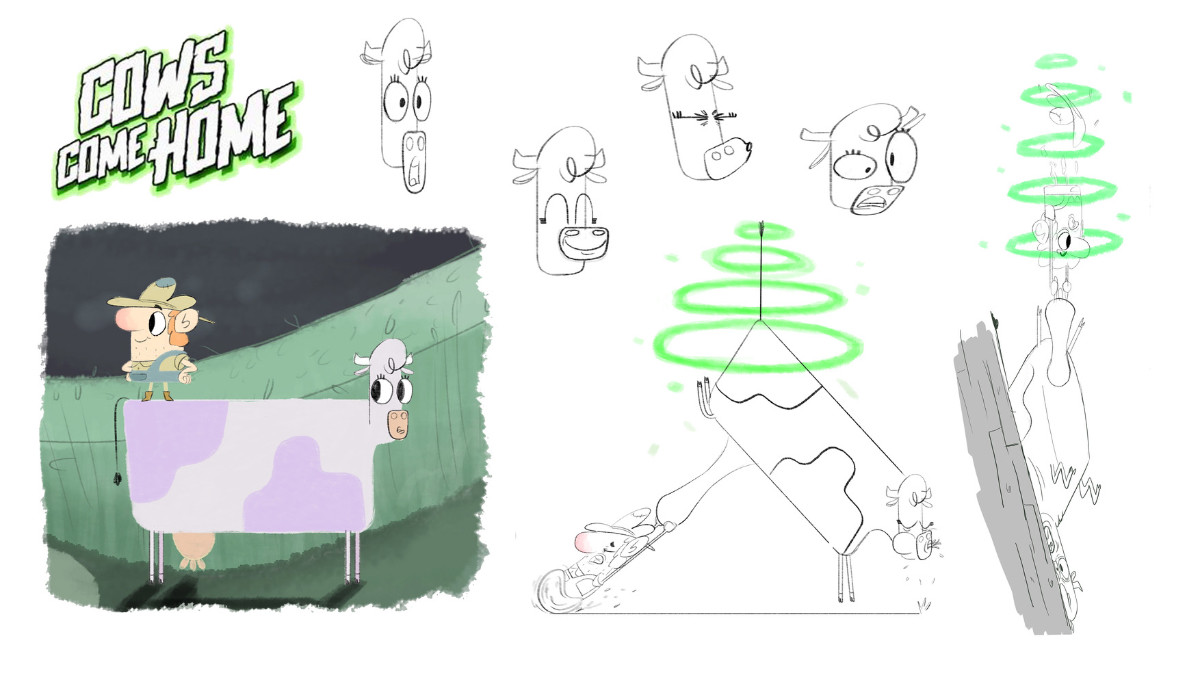 Why did you choose the farmer as your lead character? What drew you to the agricultural setting to tell this story?

When discussing story clichés, we came up with the classic alien abduction scenario but also how we could put a twist on it. From this stemmed the concept of an eerily-peaceful farm waiting for total and udder destruction to commence.

Are you anticipating a renewed interest in extra-terrestrial activity in pop culture?

Now that we’re over the ghost-filled 2000’s and the zombie-obsessed 2010’s I think this is the perfect time to give aliens another go around. Our opening and promotional designs are very intentionally paying homage to the trashy Sci-Fi Horror B-movies of the 50 and 60s, and we love seeing this style come back.

Is there anything that we didn’t ask you that you would like to say about your film?

I’d just like to say each stage of the short was a steep but rewarding learning curve. However, we had a vision that only trial and error would let us achieve. We were willing to learn many new skills, as well as tackle many new creative and technical challenges, to make this film a reality. We wanted to make something we could look back on and think, “Wow we actually made that?,” instead of the usual, “Urgh, I made that and I hate it now.” Also, who’d have thought making a miniature set would be such a massive challenge?

I hope we can inspire some people to push themselves to make something they are proud of. If anyone has any questions feel free to contact me on Twitter! 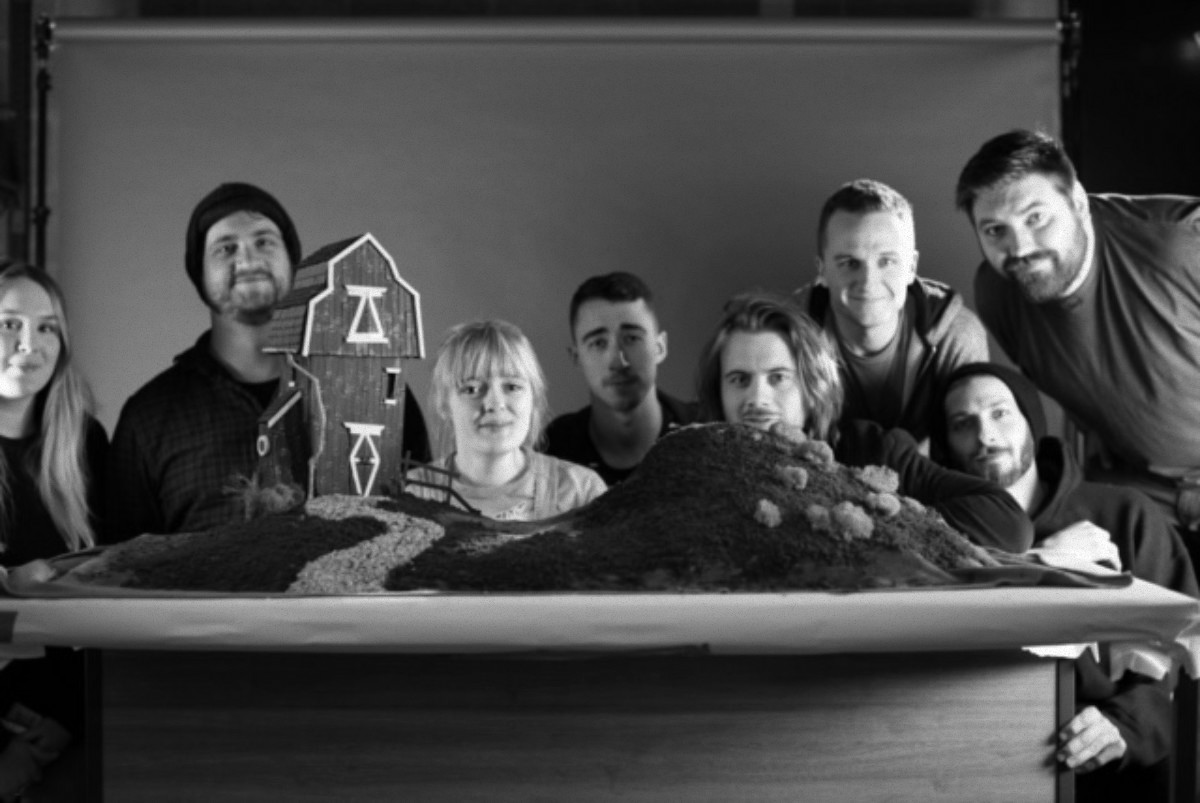 The crew behind Cows Come Home posing behind the physical set used in the short, provided by Joe Sutherland.

Want to see more from the intrepid crew behind Cows Come Home? You can boldly go to where Joe Sutherland has gone before on Twitter, set your phasers to stunned after seeing Abigail Fairhurst’s work on Instagram, and don’t forget to send an away party to Tim Bentley’s Instagram. 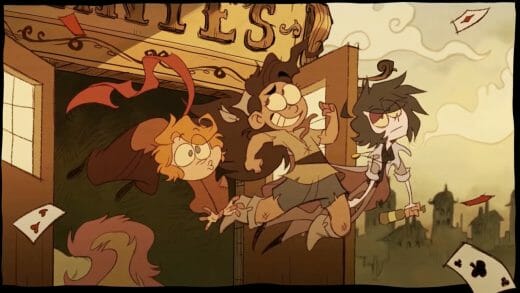 Each year, Toon Boom Animation selects 50 animators and artists to participate in their Ambassador Program. To celebrate 2021’s selected artists, ... 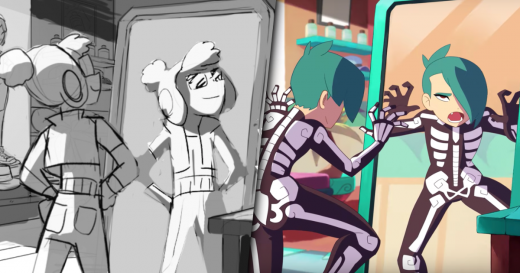 Sunshine Animation on the process behind Temtem’s 2D animated intro

Sunshine Animation is a 2D digital studio located in Madrid, which provides services ranging from pre-production to animation, colour and post-production ...