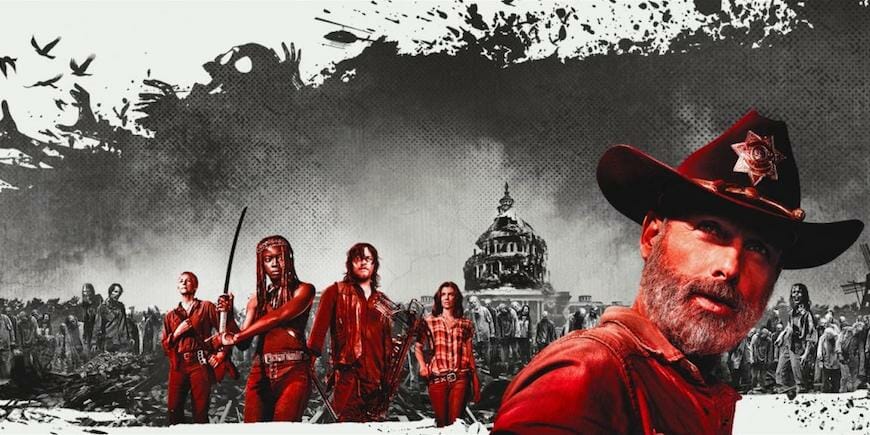 It takes a lot of brrrrraaaiiiiiiins to keep a series as complex and action-packed as The Walking Dead in step. AMC’s post-apocalyptic zombie television series launched its 16-episode ninth season on October 7, with nightmarish sets, stunts and visual effects to keep fans craving more. How do the directors plan and organize all these shots and elements? That’s a no-brainer: storyboard artist Mark Simon and Toon Boom Storyboard Pro.

The Walking Dead’s season nine premiere episode’s storyboards and animatics took center stage on live after-show Talking Dead, showcased by series executive producer and director Greg Nicotero. They were also featured on “Entertainment Weekly”. Created by Simon in Storyboard Pro, they played an invaluable role in bringing Nicotero’s vision to life — or, undead as the case may be.

Mark Simon is a legendary storyboard artist, author, lecturer and entrepreneur, with over 4,500 production credits to his name and he was inducted into the Digital Animation & Visual Effects School Hall of Fame in 2013. His clients include Disney, Universal, Viacom, Sony, HBO, Nickelodeon, FOX and Steven Spielberg, among many others. Simon has been using Storyboard Pro since version 1.5 and teaches a course about it on LinkedIn Learning.

Toon Boom sat down with Simon to chat about The Walking Dead, his tips for live-action storyboarding and why Storyboard Pro lets him produce more in less time.

Hi Mark! Did you watch The Walking Dead before you started working on it?
MS: I’ve been watching it since the beginning and I’m a fan of the comic books. It’s such a treat to work on something that you really love. One of the directors of photography, Steve Campbell, and I have been working together for over 20 years. When I decided to make the move to Atlanta from Florida, I called him to get an interview.

He introduced me to one of the producers, Tom Luse. I showed him my stuff and how working digitally is more beneficial than paper. Almost every other storyboard artist doing live-action in Atlanta works traditionally on paper or on Photoshop. When I was showing them how I can speed up the process, deliver more and make changes on the fly like they’ve never seen before —and give them real-time animatics— Tom was blown away. He told me to call him back two weeks later, I did and they hired me right then and there.

That’s awesome. So why would a live-action series pursue drawn storyboards and animatics?
MS: Stunts and effects. Especially on The Walking Dead, there are so many different departments affected by how something needs to happen. Often these stunts and effects are greater and more designed in ways you can’t tell from the script. The only way to get everyone plugged in and scheduled is with the visual blueprint of a storyboard. From green screens to cranes, there’s a lot of different things that go into production; the crew can budget and schedule everything with the storyboards.

Yes, we see that in the Talking Dead episode!
MS: Greg [Nicotero] talked about how we did the boards and how important they were. In the museum sequence where the crew are rolling things over a glass floor and there are walkers underneath it, we actually shot it in the state capitol in downtown Atlanta. The ‘glass floor’ was a visual effect and what was ‘below’ it was actually a set at our studios. 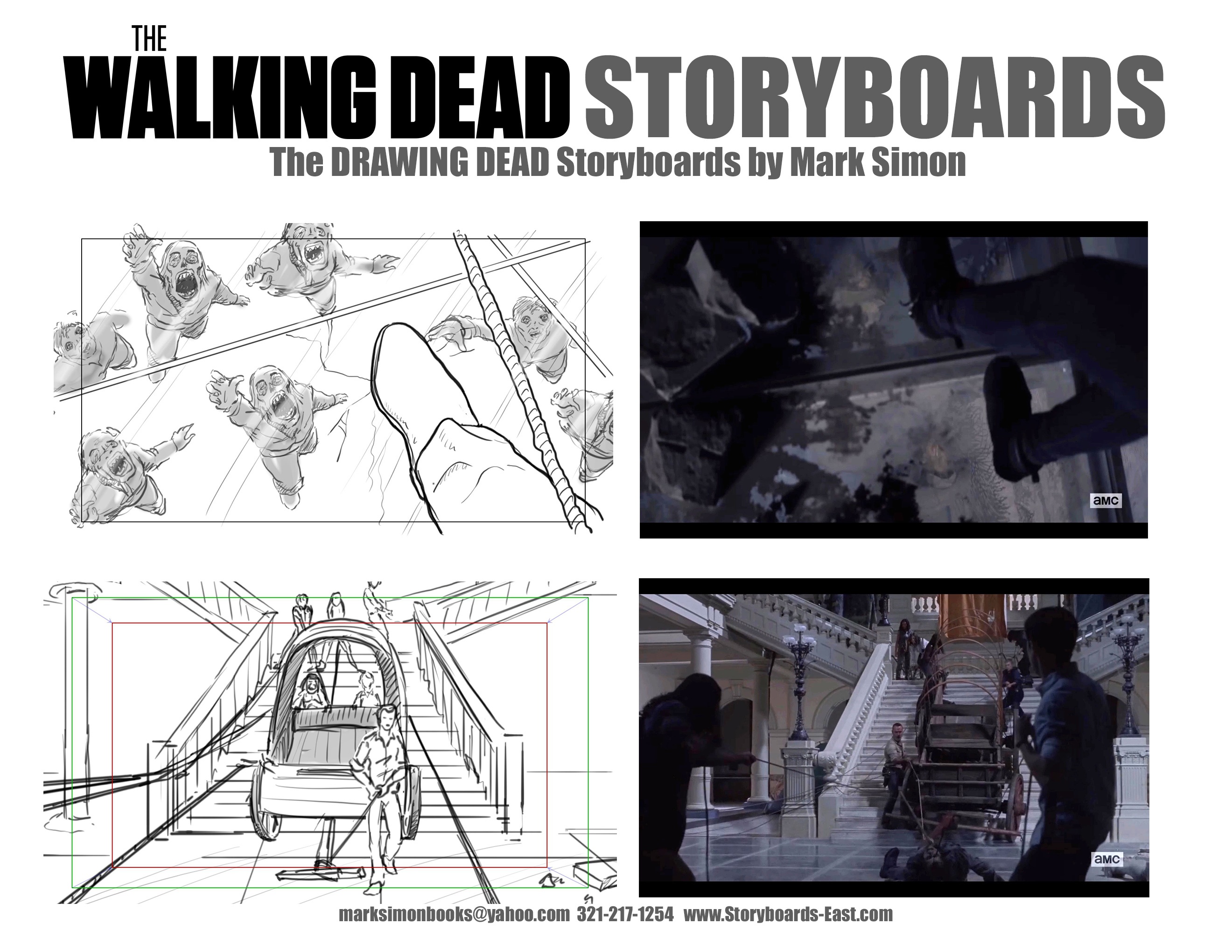 When I boarded it out, we marked which elements were shot practical on-location, which were shot on-set and which were enhanced by visual effects. My board broke all that down and they show it on Talking Dead — they blew up my storyboard in 4’ x 8’ sheets and Greg was marking off which elements they shot from each one. My storyboards were literally a to-do list, making sure they got every shot and element.

Did you storyboard the entire season?
MS: Yes, though just the stunts and effects. It’s the big sequences in each episode.

Woah. Any tips for storyboard artists working in animation wanting to transition to live-action?
MS: First thing is they have to understand there are big differences between animation and live-action. Animation storyboard artists create all their own shots and then they get notes. In live-action, you have to get into the director’s head and illustrate their vision. You don’t create shots on your own — it’s all the director’s shot list and what they want, in real time.

Animation storyboard artists also have to understand how the numbering is different too. Another of the biggest things is live-action directors and producers don’t want to see cartoony storyboards. You have to have a more realistic style.

Do you find the the drawing tools in Storyboard Pro facilitate realistic drawing?
MS: I know a lot of artists say they’re faster with pencils, but there’s no possible way you’re anywhere close to as fast as someone on digital. I keep characters on separate layers so I don’t have to re-draw anything — I just grab it and move it and we’re done instantly. I can go through and make adjustments with a director in just minutes.

With paper, it used to take me a day! Using Storyboard Pro, I’m delivering more, I’m delivering faster, I have a life because I don’t have to stay up until 2:00am making adjustments, can charge more, clients are happier and I hit deadlines easier. There is no negative whatsoever to working digitally; it only benefits production and me as the artist, and Storyboard Pro is set up to help production in every way.

What do you like about working in Toon Boom Storyboard Pro on The Walking Dead?
MS: Every aspect of the software is made to support production. Drawing digitally and on layers allows me to make changes instantly. When you’re working on paper, you’re scribbling and redrawing the framework or you’re erasing and starting over. I’ve already saved four-times the amount of time by working digitally. 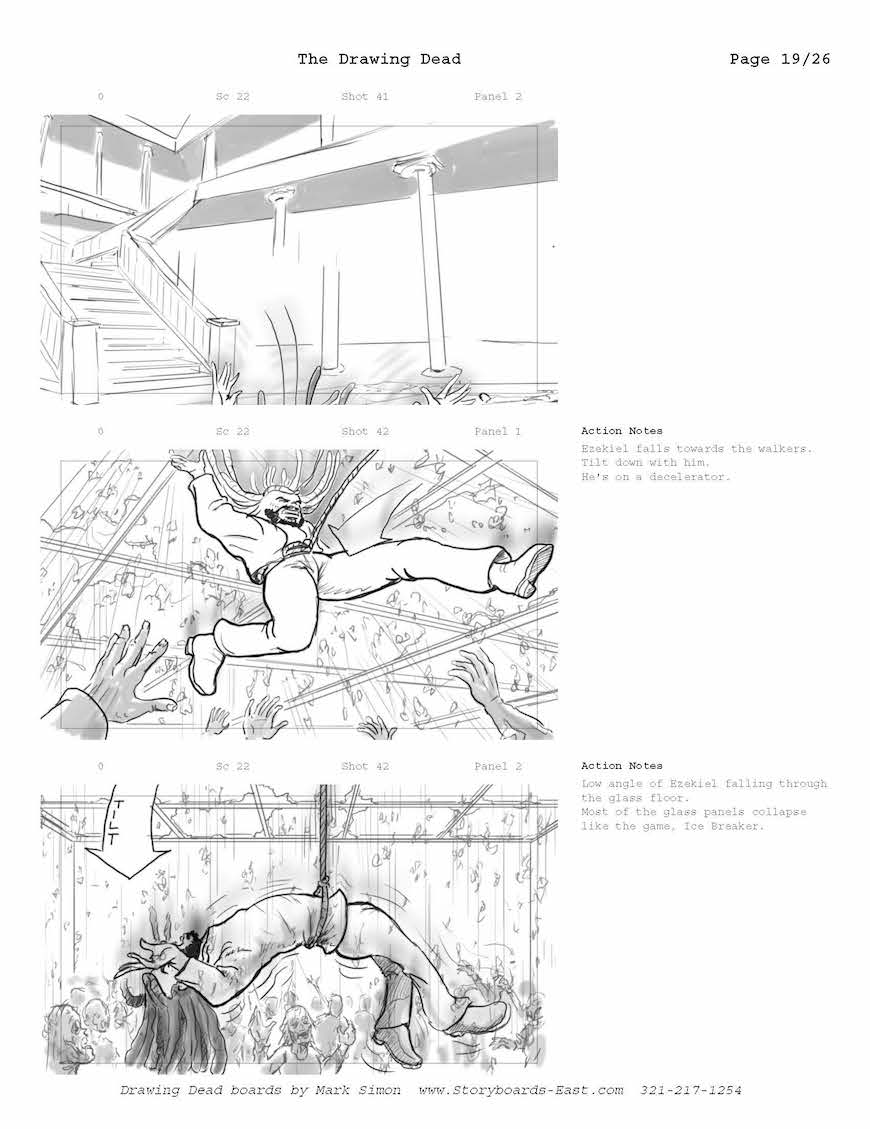 We’ll go through a sequence and Greg’ll say, ‘Oh, I don’t need this shot. Get rid of that one and let’s add another between scenes three and four.’ I just hit delete, add a new shot or scene and it renumbers automatically, and I’m done — without cutting and pasting or organizing Photoshop. As directors are talking about a scene, I can show it to them with the camera moves in real time. Then they realize how important it is to have an animatic for shots to see if it flows, even when we’re still at the thumbnail stages.

It blows their minds every time and I’m getting approvals at the first meeting — taking up less of the director’s time, my storyboards are more accurate and useful for production, and they’re seeing the finished scene in the animatic. I’ve had directors say, ‘Why are we even shooting this? Why don’t we just use your animatics?’

So what’s next for you?
MS: I’ve got quite a few projects lined up. I’m hoping to do the next season of The Walking Dead but no-one knows what their future is on the show; they don’t guarantee anything. Fingers crossed. I’ve got two other series coming up, including the Woody Woodpecker cartoon on YouTube on December 3, a reimagining of the sci-fi film Doom on Netflix in early 2019 and I’m always creating courses for LinkedIn Learning, where anyone can learn Toon Boom Storyboard Pro top to bottom. 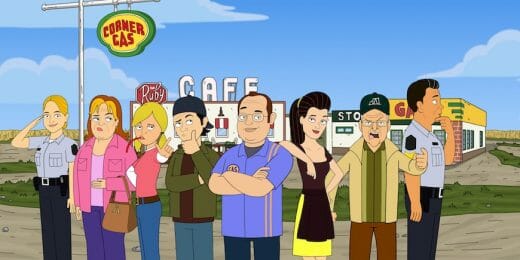 According to Corner Gas creator Brent Butt, there isn’t a singular Canadian sense of humour. Having been a stand-up comedian in the country for 30 year ... 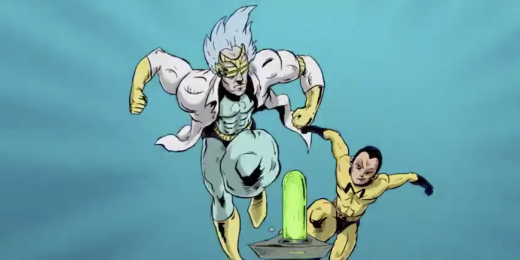 Top Animation News is a weekly column that rounds up the biggest, best and breaking stories from the world of animation. This edition covers August 17 to ...