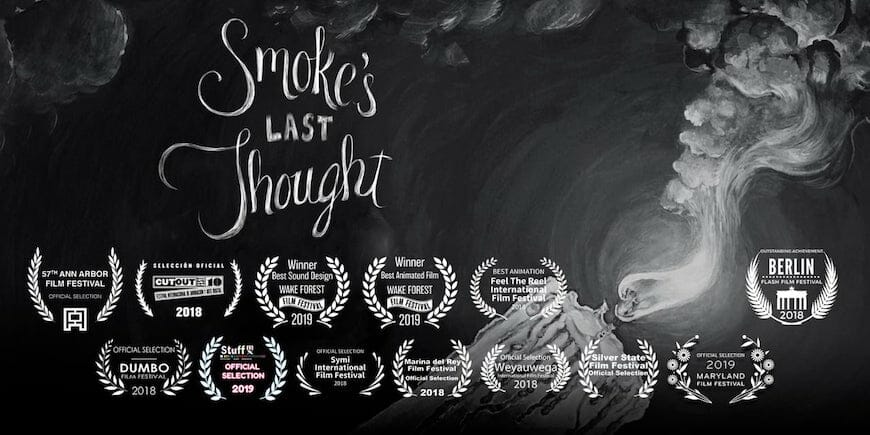 The end. Innumerable creators throughout history have been inspired by death and loss, from painter Vincent Van Gogh’s “Sorrowing Old Man (At Eternity’s Gate)” to author Joan Didion’s heartbreaking —and warming— “The Year of Magical Thinking”, written after the consecutive passings of her daughter and husband. Miranda Javid’s 2D animated short Smoke’s Last Thought taps into this same energy: one that is less about emphasizing morbidity and more an empathetic exploration of mortality.

Smoke’s Last Thought opens on an elderly Californian man, Gill, taking a bath and comes to focus on the happily burning, anthropomorphized candle he has lit. Finished cleaning himself, he casually blows out the flame — extinguishing and transforming her into the titular Smoke. Now just a wisp facing an inevitable and imminent disappearance, she floats through Los Angeles grappling with her situation and encountering other disembodied beings.

“Death is incredibly ubiquitous, whether it’s something you feel like you’re dealing with or not. It’s one of those things that sneaks up on you in almost every aspect of fear and anxiety. The main character, Smoke, is basically having a nervous breakdown because something has changed — she was the flame and now she’s the smoke, and she doesn’t know how to reverse time because she can’t,” says Javid.

The thinking behind Smoke’s Last Thought

The spark of inspiration for the short came to Javid after reading Esther Leslie’s book Hollywood Flatlands in 2015, and her subsequent fascination with its exploration of 1920s and 30s animation. In these toons, characters are infinitely stretchable and elastic which, coupled with some personal psychological and existential struggles, formed the initial basis for the film. She also drew inspiration from movies like Black Rain by Shohei Inamura, Chuck Jones’ Duck Amuck as well as the rarely depicted pedestrian experience of strolling around LA.

“It was one of those magical creative moments; I was walking in a park in LA and it hit me: there was no way I could not spend time animating a character like the Smoke. It made so much sense with the idea of elasticity that Dr. Leslie uses and it seemed like it had to be that shapeless character. I came back to that over and over again throughout this process,” says Javid.

Javid herself is a Los Angeles-based visual artist, writer and educator, and she has been an animator for the last five years. She initially began her cartoon career using pencil and paper as well as tools like iMovie and slides on Powerpoint. Knowing she needed an animation software that could keep up with her creativity and imagination, she switched to and taught herself Toon Boom Harmony.

“When I was teaching myself through online tutorials, I was struggling with something — I emailed Toon Boom and got a response the same day. It made a big difference to me to know there were real people on the other side, and that it was an intimate, smaller company that was really focused on animator’s needs,” recalls Javid.

Her self-taught status is particularly impressive given she animated Smoke’s Last Thought entirely independently over three years. She did, however, receive some help to create the music as well as with songwriting and editing — though she did most of the voiceover work on her own. Yes, that includes Smoke’s singing too. 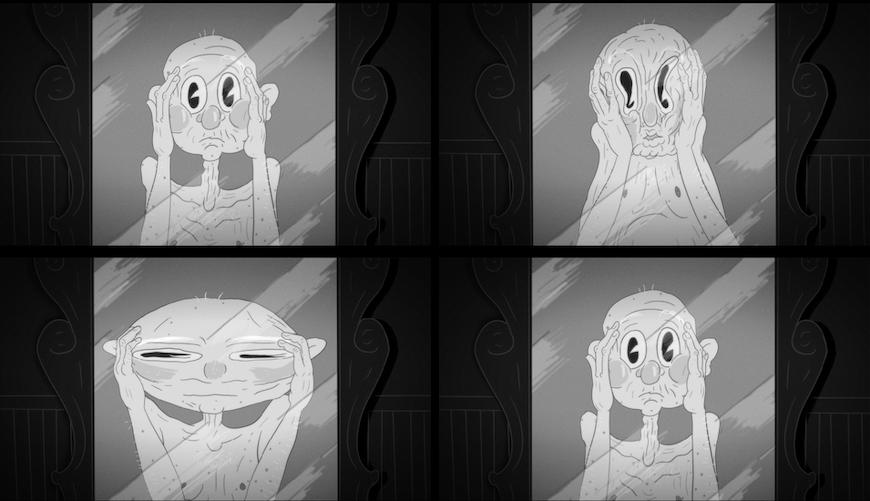 The short was a deeply emotional, personal affair for Javid; the character of Gill was named after her partner’s grandfather and inspired by her own great-grandmother. Much like Smoke, she even experienced a small breakdown six months after production wrapped.

Javid tells us, “It gets so weird when you spend three years on a film. Your relationship with these fictitious, digital creations — they become so much bigger in your mind. You have to remember that when you talk to other people.”

“I think there’s this really fascinating thing that can happen in an animation project when there’s just one person doing most of the work. It creates a weird result — I love the unusual behaviours of one mind expanded over three years of labour,” she enthuses.

Anybody who watches Smoke’s Last Thought can see Javid’s style is inspired by her work in the visual arts. A trained sculptor, she tends to think spatially, which may be why she is so drawn to the flatness of 2D animation. While she has the perspective of a traditional artist, she has none of the art world’s pretension.

“It’s helpful to imagine a world where [traditional studio and commercial arts] are more blended. The truth is I pull from both sides and you probably see that in my work,” Javid elaborates.

“I talk a lot about the Newtonian world and gravity, and how in animation we don’t have to follow those rules. My fantasy is spaces where you don’t literally have to feel weighed down,” she continues.

This can certainly be seen expressed in the fluid, flexible shapelessness of the characters in Smoke — whether they be wisps, animals or humans. Javid describes herself as coming from an experimental animation background. In her practice, she enjoys combining both pencil and paper as well as digital tools like Harmony for hybrid pipelines.

“Sometimes when I’m working in combination with paper or analogue, I’ll still rough out what I’m going to do in Harmony. I really like the way that Harmony has the camera feature in it. If I’m having trouble figuring out how to move through a space and really give it a more dynamic camera movement, I’ll rough it out in there and use the camera settings to add individual perspectives the way you would with a real camera in a film,” Javid explains.

She continues, “Working in Harmony was so helpful because I could modify things but still have all that flexibility. Going back to the idea of camera movement, for example, if I realized that one character needed a different body part or movement, I could easily pull in the shot and rework something and export it out again.”

While animating Smoke’s Last Thought, Javid used plenty of Harmony features beyond its camera capabilities — noting that she did more compositing that she would have originally expected. For shots that were half hand-drawn, half digitally drawn, she would import them as a layer before sketching on top of them.

“There’s a shot at the end where there are these molecules surrounding Smoke and she’s shrinking, and they’re fluttering around and even singing at one point. I went back and forth a lot on that shot between Harmony and paper,” Javid tells us.

“In the end, I not only drew the smoke on top of the molecules using that layering process, but I was even able to use the pixel brushes to punch up some of my initial hand-drawn stuff. I was able to go in and fix or accentuate one of the molecules to add greater depth or layers,” she continues.

Having finished producing and promoting Smoke’s Last Thought, Javid is back to teaching as well as working on two new projects — one of which is being produced using Toon Boom Harmony. When asked what she advises her students wanting to get into animation, Javid says, “I tell them not to wait for permission.”

She has noticed how many students come into the classroom feeling like they are bad at technology, too often because of their marginalized backgrounds or identity. She hopes to reframe that conversation.

“I think historically that kind of statement pushes out certain kinds of people who didn’t get access to technology at an earlier point. They are just tools and things we can learn over time. I subscribe to the idea of mastery being 10,000 hours of work because it debunks the idea of ‘genius’ or ‘good at technology,’” she explains.

That said, she does recognize animation may not be for everyone — though that doesn’t mean one should give up on a creative career.

She continues, “Motivation and passion are resources to test out yourself. A lot of people will come into an art space thinking they’re supposed to like one thing, but usually the things that motivate us and we enjoy doing tell us what we really want to be doing [with our careers]. So, if you sit down and don’t want to animate for hours and hours, that might be an indication that while you love the animation process, maybe you should go into being a producer or graphic designer. Everything is data.”

Looking at the self like this, perhaps an apt way to finish is with a line from Smoke’s omniscient narrator: “‘Me’ is a mirage. The end is not you.” 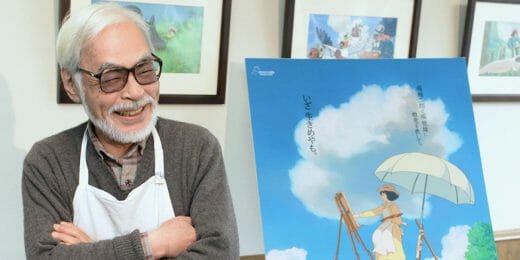 Top Animation News is a weekly column that rounds up the biggest, best and breaking stories from the animation industry. This edition covers January 3 to ...