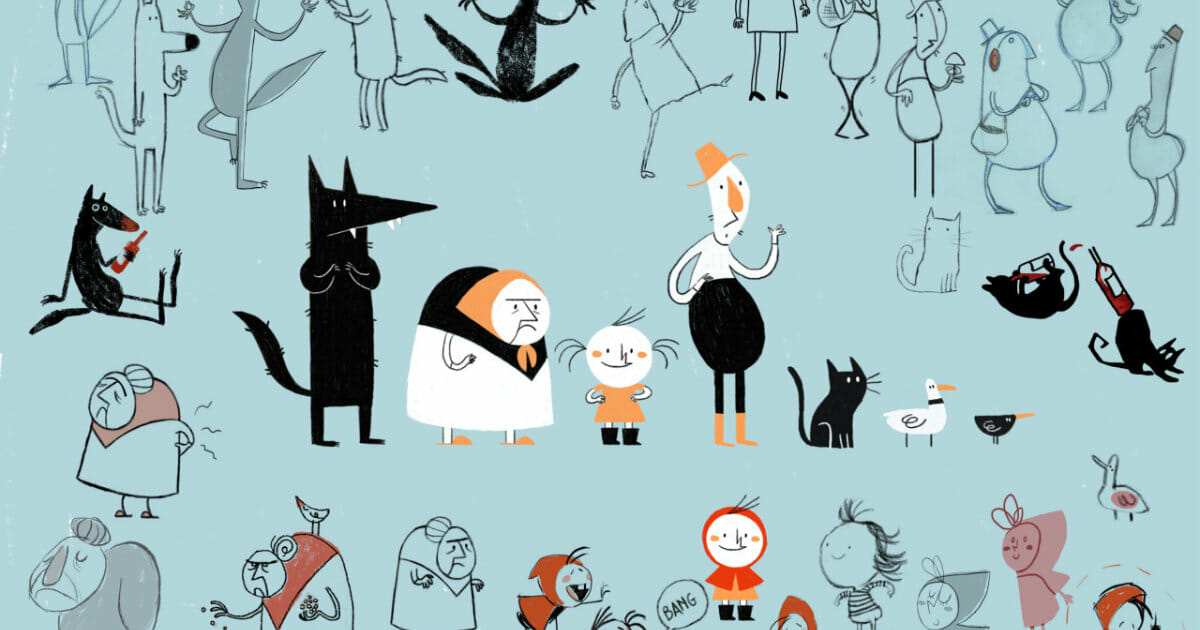 In a fairy-tale forest, a grumpy granny misplaces a bottle of wine. This leads to a cascade of events that includes misplaced laundry, multiple concussions, evidence tampering, mistaken identity and a quick meal. MERLOT was directed by Giulia Martinelli and Marta Gennari as their graduation film at the CSC National Film School in Turin, Italy, and has won numerous awards, including a Staff Pick from Vimeo. The runtime of the film is five minutes and 40 seconds, and watching with the volume on is recommended. You will hear why.

Read on for our interview with Giulia Martinelli and Marta Gennari on the thought, planning, and process which fermented into MERLOT.

Merlot reminds us of Little Red Riding Hood, but plays with characters in interesting ways. What inspired the plot and characterization for this film?

The film came out of the blue during one of our brainstorming sessions, playing with words and deciding we wanted to build a funny connection of events. We needed to find an idea that allowed us both to experiment with animation and to have fun. So we armed ourselves with paper, pencils, imagination, two glasses of wine… and the rest is history!

We enjoyed the limited colour palette, flat colours and thin lines used in the character designs. How did you develop the visual style for this film, and where did you draw inspiration from?

The minimal visual style came from the need to keep things simple. MERLOT was our first short film and our first experience with the animation production process. We were also a small 2-person team! Then we realized that following several characters, situations and moving frames was already quite a lot of work for the audience’s eyes, so we made the character’s design and the colours simple and easy to recognize. The look, the characters of the film, and the graphic universe are a good combination between our styles of drawing. 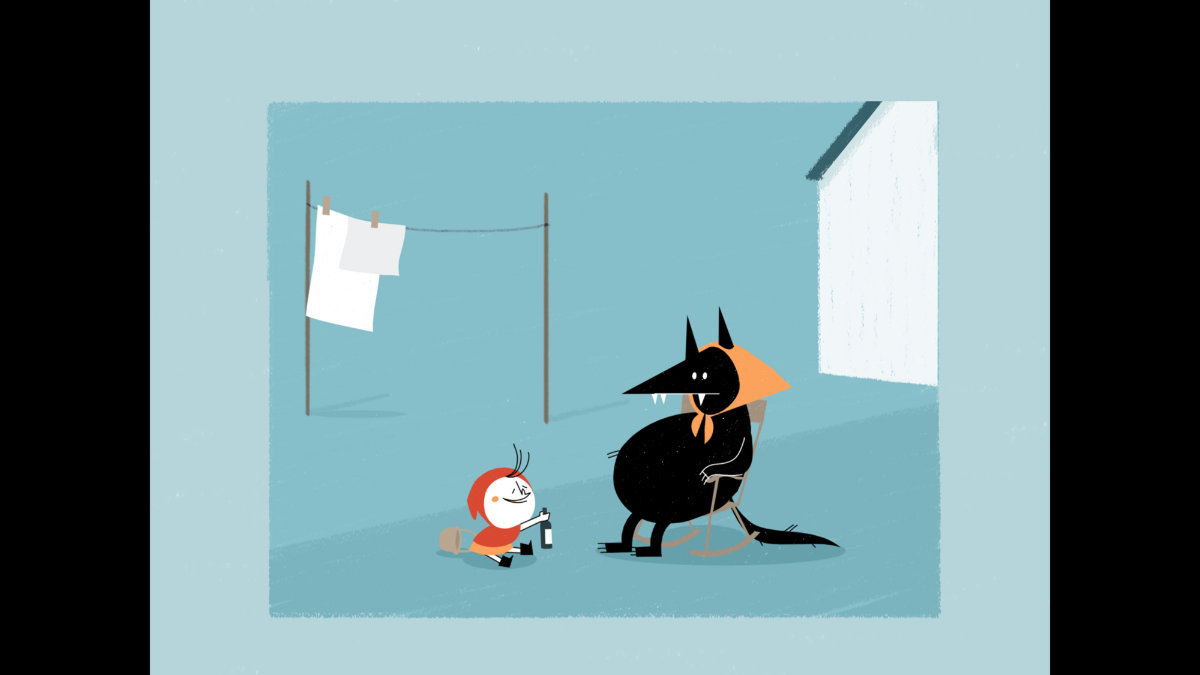 We noticed that the characters in your film push and pull on frames which separate different locations. What led you to use these panels?

Since the storytelling is based on connected events and how different situations interact with each other, it was crucial for us to be able to show at the same time different locations and characters. The idea of the panels, and the fun structure of the entire film was the perfect solution.

This structure was interesting to plan, to guide the audience from one side of the screen to the other, using animations and sounds to catch the eye and the ear where it was needed. We got the inspiration for the frames watching Paul Driessen’s short films. His clever use of split-screen in his narration inspired us to find a similar unconventional solution to tell our story.

Sound effects play a large role in Merlot, where nearly every character clinks and pops like wine glasses, corks and bottles. What led you to experiment with sound in this way?

The sound is truly the half of MERLOT’s soul: we decided not to use any music or voices, in order to experiment more and focus only on the sounds. We asked the amazing sound designer Alessandro Nepote to create a world of glass and corks, in which every character is characterized by a specific material. The sound designer recorded all the foley himself and created a crescendo of sounds that helped with the rhythm of the story. Many audiences and professionals appreciated the sound-design work in our film and that makes us very happy and proud! 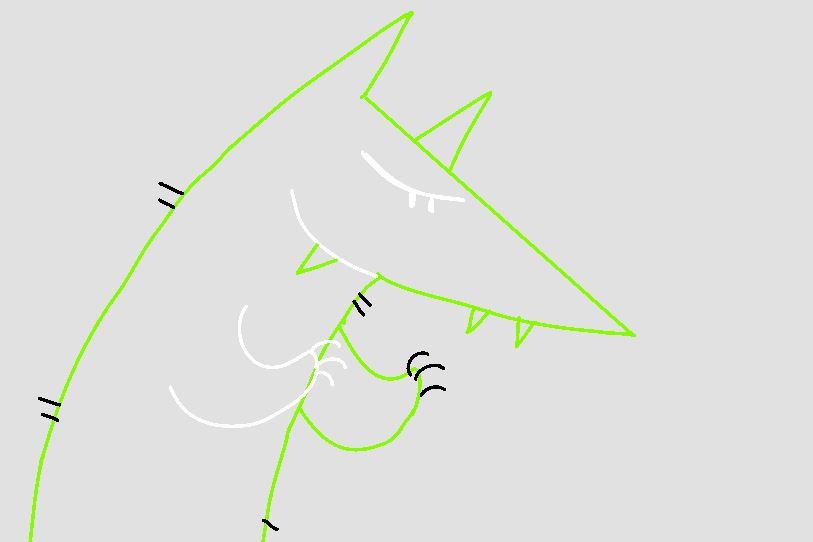 Note the sets of outlines on Lupo the wolf. Images provided by Giulia Martinelli and Marta Gennari.

Which animation techniques did you use to bring your characters and scenery to life?

The animation technique is 2D traditional animation, made with Toon Boom Harmony. The backgrounds are drawn in Photoshop and the compositing in After Effects. Harmony was great because it allowed us to use an ‘invisible’ outline, add textures, and play with loops.

How would you describe the reaction to this film from audiences online and at festivals?

We are very happy with the reaction we got from festivals and, recently, online. Merlot travelled the world, has been selected in so many film and animation festivals in all the continents and collected 26 prizes. It’s now online on Vimeo with a Staff Pick and it’s great to be able to show it to an even bigger audience. The comments and the feedback we get makes us want to create more.

Interested in seeing more? Giulia Martinelli is currently working on a new short film called MAREA while Marta Gennari is preparing an animated documentary about Italy and second-class trains. You can follow both Giulia and Marta on Instagram.

Top Animation News is a weekly column that rounds up the biggest, best and breaking stories from the world of animation. This edition covers October 7 to ...