October is Autism Awareness Month in Canada. For Montreal-based charity Spectrum Productions, every day of the year is about creating opportunities for youth and young adults on the spectrum through video and media production — including animation skills in Toon Boom Storyboard Pro and Toon Boom Harmony.

Liam O’Rourke and Dan Ten Veen founded Spectrum Productions to help young people on the spectrum fulfil their potential by providing an inclusive environment where they can pursue their production passions, either as a hobby or professionally, and ultimately develop the vocational and social skills necessary to give back to society. Over the years, it has taught Toon Boom animation to around 60 creators through its Saturday Morning Cartoon Club program, camps and professional track pathway, the Creative Media Lab. In the latter, the young artists develop their skills through larger personal projects, mentorship and real client work via Spectrum’s social enterprise production services.

“Toon Boom animation software helps our animators tell their stories, and the training and support we have received has been instrumental in achieving our ongoing goal of giving guidance and production tools to our members,” says Spectrum Productions co-founder Dan Ten Veen. Felipe Aransanz, Spectrum Productions Lead Animation Instructor added, “Toon Boom’s tools offer the most flexibility and power, while simultaneously keeping our animators motivated with a user interface that is approachable and allows them to operate at an industry-standard level.”

Currently, Spectrum Productions has three animators developing Toon Boom skills: Lucas Leroy, Alex Kowalczyk and Mankaran Singh. They each spend a few days every week in the studio working on their personal and passion projects. For instance, Kowalczyk enjoys the combining his interest in history with Toon Boom Harmony’s drawing and colouring tools, and dreams of creating his own animated comedy.

Singh draws his inspiration from Japanese anime and Ten Veen notes that in just a one year, the budding animator has already refined his skills in rendering characters, backgrounds, colouring and lighting effects and has pushed outside his comfort zone to develop keyframe and drawing skills. Leroy knew he loved animation as a young child after watching Warner Bros. and Disney television series and films. He dreams of opening a Quebec branch of French studio Xilam, with a mission of creating Canadian-Franco coproductions aimed at both markets — and global ones, as well.

“I like making rigs with symbols, pegs, masks and a bunch of custom drawings and effects to create my characters and reuse them for the animation phase in the digital cut-out puppet style,” says Leroy. “Personally, I prefer making basic 2D animations in a classical Warner Bros. and Disney style with key drawings and strong in-betweens to have better final results.”

Animating in Toon Boom animation tools allows these young animators to pursue their dreams, both through its toolsets’ flexibility and ease of learning. It is also helping them grow skill sets with long-term benefits — both professionally and personally. Ten Veen has watched them evolve and express themselves in new ways; Leroy, for example, has used his love of French slapstick humour as fuel to learn correct timing and exaggeration.

“Lucas has definitely learned a multitude of skills through Toon Boom programs that transfer over to other areas in his life — he is constantly researching different approaches to rigging and straight ahead versus pose-to-pose animation to expand on and improve his techniques,” says Ten Veen. “Lately, he’s really been getting interested in learning better workflow, keeping track of his assets and implementing shot lists and animatics through Storyboard Pro, which has carried over to aspects of his own personal organization.”

According to Ten Veen, the Harmony functions that make it easier for beginner animators on the spectrum to learn are the vectorized lines (the first point-of-contact to feel in control of their drawings), the ability to refine curvature and manipulate stroke weight, and other drawing tools that help the artists get images just right. From there, they can get comfortable with the animate and transform features, which open the floodgates to storytelling.

“Learning how to animate can be intimidating when you consider all the techniques, styles and tools — Toon Boom offers accessibility throughout the process,” says Ten Veen. “Our process is centred around using software to simplify creative expression and propel storytelling that encourages experimental techniques. We need tools with ease of use, resources to learn and enough power to achieve the look and ideas desired from any imagination or style. Toon Boom checks all those boxes and more.”

Audiences can see Spectrum Productions animated work live and support its incredible initiatives at its 9th Annual Gala at Montreal’s Rialto Theatre on November 18, 2018. The event will include short films produced by 60 young artists from its 2018 summer camp, a silent auction and more, with last year’s edition drawing 650 attendees and raising $55,000. These funds enable Spectrum to launch new programs to #changetheconversation around autism to be more about talent and creativity. 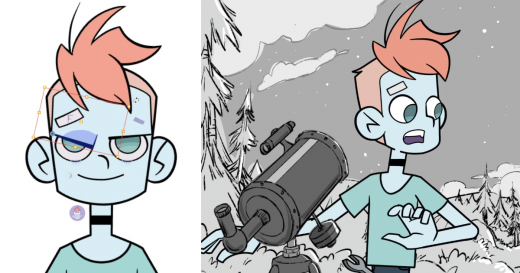 Interested in building your career in animation? The new Toon Boom Training Courses on Rigging are intended for artists who are new to the craft and want ...