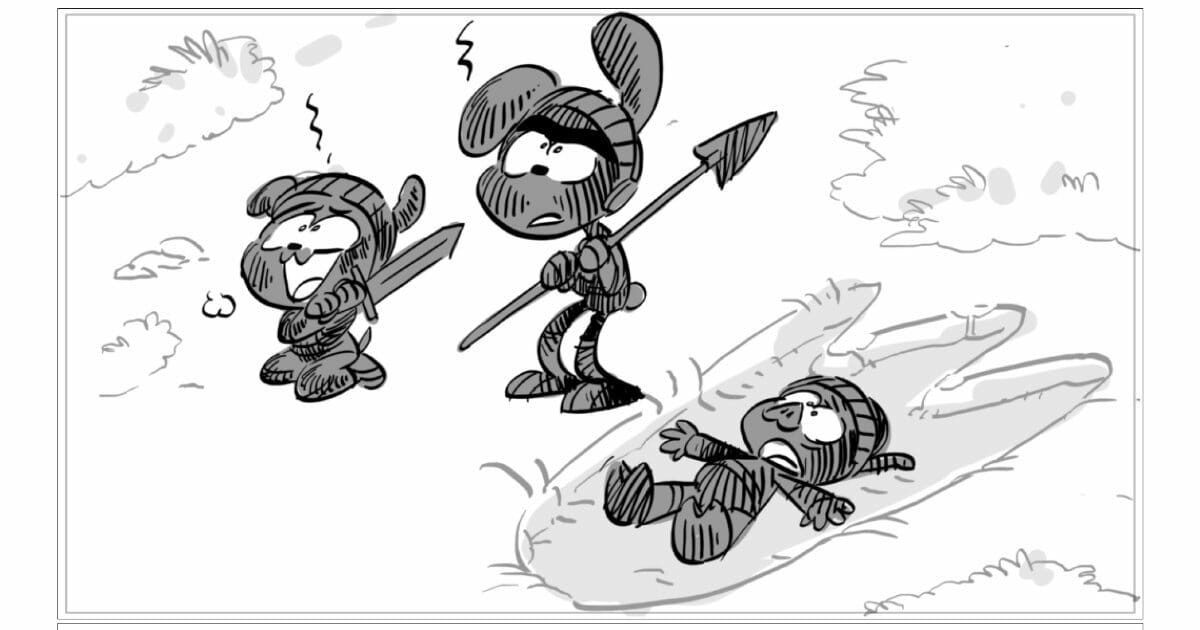 Violaine Briat’s story began in Dreux, France. She moved to Redlands, California as a teenager, returned to graduate from Gobelins, and has since worked as a story artist in France, Japan and the United States. Violaine first encountered Storyboard Pro — version 1.2 — while boarding at Zagtoon. Her IMDB credits include series work for Cartoon Network, Nickelodeon and Warner Brothers and she is currently working with Sony Pictures Animation. In her spare time, Violaine posts comics and drawings to her blog.

We were curious about Violaine’s view of American animation, the lessons learned while working in different markets, and her hope for the future of our industry. You can find our dialog with Violaine Briat below. 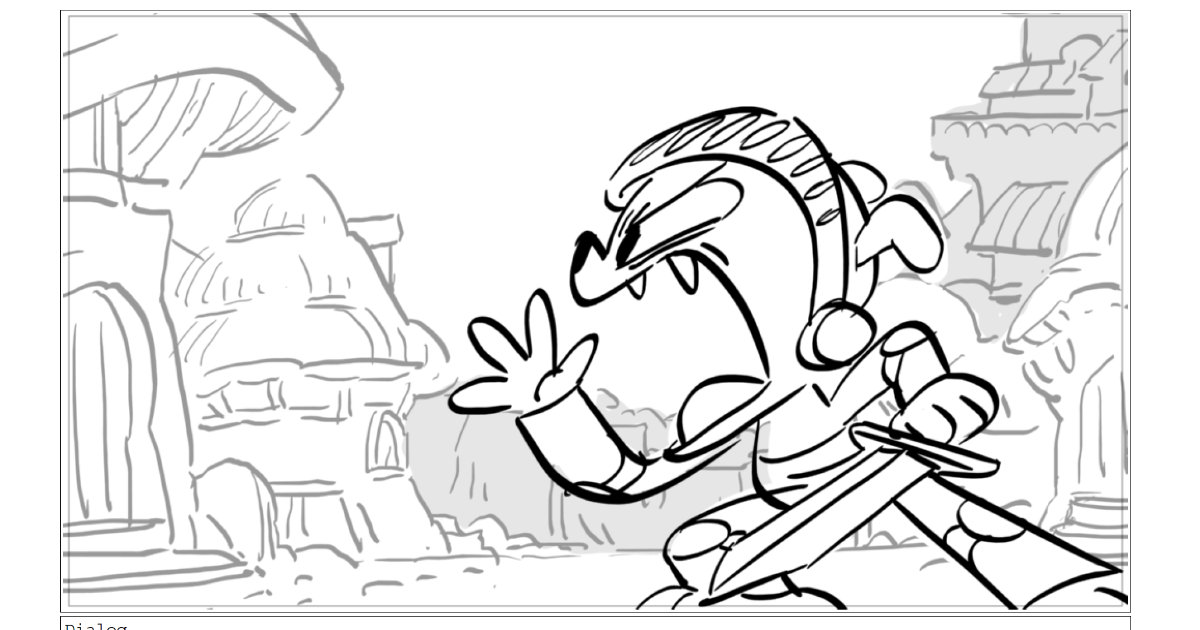 What led you to be a story artist and what do you enjoy most about the craft?

When I graduated from Gobelins in 2011, the first job I landed was a storyboard artists gig at ZagToon on the show Ko-Bushi. I didn’t really have a strong sense of what storyboarding on TV entailed back then, so working on this show made me realize how much creative freedom and drawing draftsmanship was involved with this craft!

When I went into animation, I was worried I would have to smooth splines for CGI characters, so I was just excited I would get to actually draw! Storyboarding is also the closest thing in animation that you can do to making comics, which was my original dream as a kid.

What led you to make the move from Paris to LA?

I worked in the French TV animation industry from 2011 until 2016, during which I worked for over 10 different TV shows and projects. I actually spent one year freelancing in Japan under a working holiday visa (from 2014 to 2015) which helped me build up my portfolio and online presence. Thanks to that effort, I got noticed by the Loud House crew and passed the test for the show! I started working with them on a freelance basis in 2014 and after a couple of years they managed to get me an O1 visa to make the big leap.

#ThundercatsRoar ‘s Panthro Plagiriazed was storyboarded by me & @kpax4snax + directed by @Jpolgar1 ! It was the most fun I ever had planning and boarding a crazy sequence. Here are some of my Boards to final comparison. The first 6 seconds are @Jpolgar1 ‘s boards then it’s me! pic.twitter.com/a85EYPD1rM

How is storyboarding different in the French and American animation industries? Was there anything that surprised you?

However, when I started working on Craig of the Creek — the first storyboard driven show I had ever worked on, I started to notice a lot of differences in the pipeline — first of all, there are revisionists! I had never worked on a show with revisionists before. Loud House now has some, but there wasn’t really any when we started.

There are also multiple managerial positions in America that simply don’t exist in the French pipeline, mostly because of budget restrictions. Overall I would say the French animation industry works with skeleton crews compared to the American crews, so each different position on a French show ends up doing the work of 2 or 3 people on an American show. Because of that, the mode of communication in France is also a lot more direct, and we don’t have the time to have any big meetings or even pitch our storyboard because the schedules are really tight.

The first time I was asked to pitch, I hadn’t spoken english for a while and I was really freaking out! It’s scary because you really have to perform in front of an audience. Now I love pitching. It’s one of my favorite parts of the process, because you get the instant satisfaction of seeing an audience react to your work. Overall, I really like how shows are run here. It’s really nice to have more time and more input — to be able to think more about storyboards and polish them.

What are some of the biggest misconceptions or misunderstandings that you have heard about storyboarding?

It’s really hard for people to know the exact amount of work you have to put into a storyboard, because the job has changed so much over the years. Sometimes you can get away with just one panel a scene, and sometimes you have to basically block all the animation keyframes.

Communication is key, and navigating between one show to another will always have a board artist adjust over a period of a couple weeks because expectations for boards differ so widely from a production to another.

What features in Storyboard Pro would you like more story artists to be aware of, and why?

I think one of my favourite features that Storyboard Pro offered recently was the Paste Layer Special option, which allows for simple fixes on backgrounds or still images in a long scene. It has saved me many hours of work! I think an under-used feature is definitely Spread Layer Motion, which can allow for very simple fixes — like resizing or moving an object across multiple panels. Same for the Generate Auto-Matte feature… I remember the rough days when we didn’t have it.

Comparion Boards to final ! (there’s a glitch in my boards @ 0:04 ) boards from me, directed by @Jpolgar1 ! #ThundercatsRoar for @cartoonnetwork ! ✨✨⛈️ pic.twitter.com/PmbHBvokzg

How would you like to see the industry grow or change?

I would love to see more cartoony shows! The pendulum always swings one way or another, and right now I am seeing a trend of beautiful realistic animation. I grew up watching WB’s Looney Tunes and the original Cartoon Network cartoons — like The Powerpuff Girls and Dexter’s Lab — so slapstick and over-the-top animation will always have a special place in my heart.

Whenever I create a pitch for animation, I always ask myself: “Why am I choosing for this story to be animated rather than filmed in live-action?”

Do you have advice for students who are interested in working in animation?

Yes! Don’t skip classic training — by this, I mean figure drawing and drawing from observation. The more you can draw from life, the better you will become, and the easier it will be for you to draw for animation. The great thing about drawing from life is that you can do it at any time, all the time, and it’s free!

Also try to network in a respectful, earnest and sincere way with people online. Don’t ask people for a job, but I think it’s ok to ask for critiques on your portfolio.

Was there anything else you wanted to tell our readers?

Yes! I’m really excited to say that I am working for the first time on a feature project at Sony Pictures Animation. Up until now I had only known the pipeline for TV, so it’s been fun to discover a new unexplored territory for me. I can’t wait to show everyone what we’re working on. 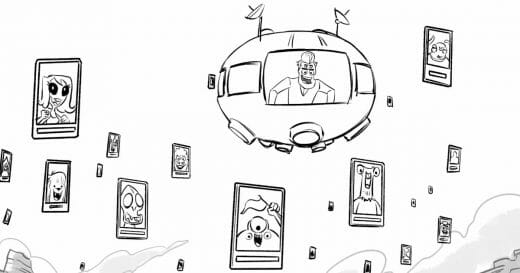 Our new Storyboard Pro Fundamentals course is intended for artists who are interested in learning digital boarding workflows in Storyboard Pro in order t ... 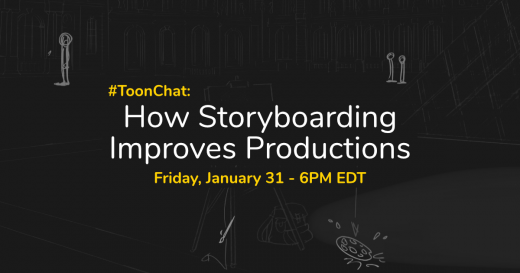