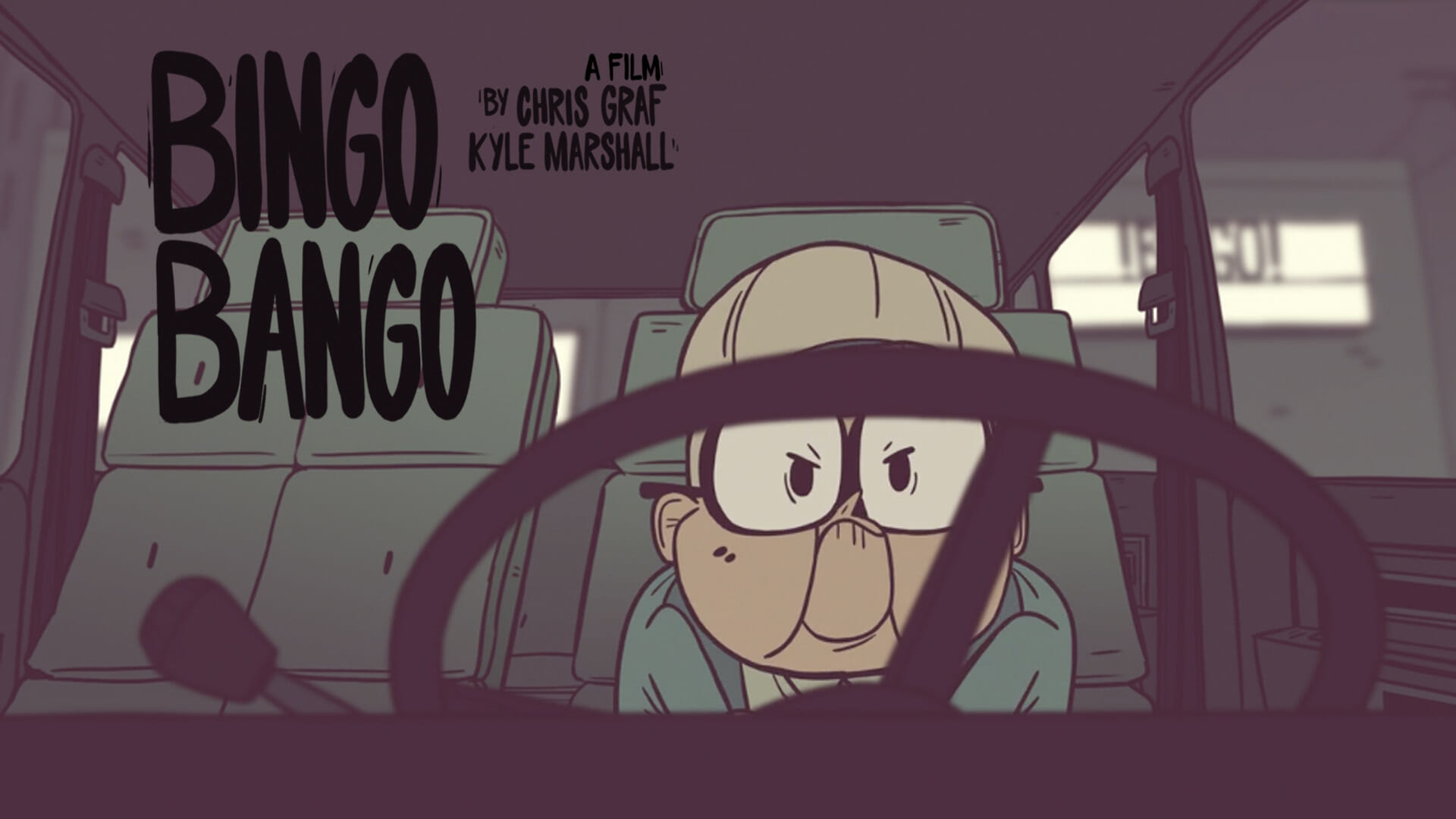 In BingoBango, a film by Chris Graf and Kyle Marshall, a little old lady finds herself face to face with the grim reaper. This minute-long short is packed with colourful characters, a fiery explosion, and a dark (but hilarious) twist.

Chris, who created the FX and did the compositing for BingoBango, and Kyle, who focused on characters and BGs, have been friends for years. They’re both from Saskatchewan, where they attended the same animation college. After school, they eventually found themselves working in Ottawa. It was there that the idea for BingoBango was born.

We caught up with Chris and Kyle to learn about how they collaborated on the short film together. Read on to find out what inspired BingoBango, their process for creating the animated short, how they went approach 2D FX and character animation, as well as their advice for artists who are working on their own passion projects.

How did you end up making BingoBango together, and what inspired the film?

Chris: We started talking about the idea for BingoBango one evening in Ottawa, chatting over some pints. At the time, I was working on something that wasn’t creatively fulfilling, and so the idea of a side project was really appealing. We wanted to do something more adult, that was silly but also dark — a style that was completely different from what we were doing at work. And, we thought it’d be fun to flex a bit with this one. So we figured, let’s just blow up a little old lady in a car! We agreed we’d make something one-minute long because that was doable, and we felt that people had the attention span for that length.

Kyle: Exactly. We decided I’d throw some funny characters together, and Chris could come up with some cool effects. To build the narrative we actually started with the explosion. We knew that a big explosion would be the climax of the short, and we created the rest of the story around that plot point. Since we worked on this as a passion project, we knew we would keep it short. So we stuck with a simple story that has a funny twist. While we did the story and animation for this short, I want to shout out some people who helped out. Sean Thornton and Robert Karpay were on sound design and voice acting, and Alistair Murphy did some compositing.

What prompted you to create the film in 2D?

Chris: Most of the animation work we do is in Toon Boom environments. We’re usually building the characters using complex puppets that you can animate by moving their shapes around. With this project we wanted to go more classical, since we don’t often get to do that at work. We also felt that traditional animation would create the look we wanted. For example, even if the characters were standing completely still, we wanted it to feel like there was a boiling line movement to them.

Kyle: I really love how 2d has a raw honesty to it, it doesn’t have to look so polished. We felt that type of aesthetic made sense for this silly little short. Making BingoBango in 2D was also a way for us to go back to our animation roots. When we studied animation we were taught traditional. It was all pencil and paper. So we needed to see if we still had it in us, all these years after school. Especially since I spend most of my time these days boarding, it was really fun to go back to animating hand drawn. I actually prefer hand drawn!

BingoBango has a really distinct look. How would you describe the film’s aesthetic, and what was the intent behind this choice?

Chris: The aesthetic is definitely thanks to Kyle. I think it’s distinct because it has this ugly but appealing look to it. It’s not totally refined, and it’s kind of sketchy. And that really fits the characters of the short. The color palette we used feels a bit like a sepia-toned Instagram filter, which is a cool palette to work with, especially if you want a fiery explosion to stand out. By using cool blues and dark tones and setting the film at night, we were able to create cool visual contrast with the explosion.

Kyle: It’s honestly just the way I draw. But I also felt that the aesthetic was clearly more adult, which made sense for a short that features some cigarette smoking criminals. The dark tones reflect the dark joke of the film. When you’re blowing up some poor old lady, you can’t have the characters looking like a Freddy Moore drawing – although I guess that could be funny too!

Can you both tell me a bit about how you approached the character animation for BingoBango?

Chris: With character animations you usually have a character design to refer to. But if I’m animating an explosion that has to dissipate, I have to think about design elements in every single drawing as it changes, because it has to adapt to whatever is happening in the environment.

So, I straight ahead all my drawings, which means I don’t key them out. I start rough, with very basic pencil lines to get an idea of timing and spacing. This helps me figure out a road map of where I want the explosion to go, and what I want it to do. Then I eventually go back over it with more detail, fleshing it out.

Kyle: I keyed everything out in Toon Boom Harmony in the same way that I would do it on paper. I keyed out my main poses and then I started in-between. Because we didn’t have builds or rigs I couldn’t really use the in-between tool. My main approach was to get those keys down, make sure the poses were strong, and have the timing right. Once I have all the motion in then I come back and animate the mouths. I really like to exaggerate the mouths, and have fun with them. If motion is out of the way, I don’t have to worry about the timing looking off with the mouths.

The explosion sequence is so cool! Chris, can you explain what went into creating this sequence and the 2D FX?

Chris: I watch a lot of anime and so I tend to draw inspiration from there. I really feel that anime is far ahead of us when it comes to FX. Aside from that inspiration, I wanted to have some fun with the explosion. So I actually included some sneaky frames of the grim reaper into the explosion’s flames. It’s only in there for about two or three frames, so people miss it. The grim reaper is meant to be a little easter egg for viewers. Trying to draw a character within an explosion in a way that sells the idea is a challenge. I went over the grim reaper a lot with Kyle because we wanted to make sure it looked cool and felt right. This was one of the best parts of doing our own film. We could do whatever we want!  It was exciting to push ourselves in directions we haven’t gone before.

What was the most challenging aspect of making BingoBango?

Chris: Finding time to make it.

…It took us nearly five years from the initial idea to completion. When we started working on it, we were using Toon Boom Harmony 10. We finished it with Harmony 14! That was actually great because over those 5 years the compositing tools we had available helped us solve some problems. But yes, time is a challenge. We’re both always busy and so finding time to work on a passion project was tough. I remember at one point, maybe two years in, we started to doubt ourselves. When you work on something for so long you start to second guess whether it’s actually any good. Sometimes we would ask each other, is this actually funny?

Kyle: If BingoBango had been the only animation work we were doing, we could have finished it within a month. But the last few years have been busy, as Chris said. We had to chip away at this while balancing full-time jobs and freelance work. I even moved to California in the middle of making the short, which made coordinating on BingoBango more complicated. We sometimes would go months without touching the project. But you know what they say, genius takes time. Maybe we’re the Richard Linklaters of animated shorts?

What advice do you have for other artists that are working on an independent project?

Chris: Stick with it and have confidence in your own, original idea. When you work on an idea for so long, it can be hard to keep focused and bring it to completion. You might end up distracted by a new idea, or start to doubt the one you’re working on. So my main advice is definitely to try to stick with it. It’s not easy, but it’s worth it. And other than that, just make sure you work on something that you really enjoy. In making BingoBango I had a lot of fun, it felt good to work on it.

Kyle: Yeah, and once you manage to finish one project, you’ll have the confidence to work on more. And I agree with Chris — passion projects are all about having a good time. Work with someone you like hanging out with, and enjoy the collaborative process. I really enjoyed the fact that I could be involved in way more aspects of the animation pipeline on this project, since it was just the two of us. Working in animation you don’t often get that chance to wear different hats.

The ending of BingoBango doesn’t look so good for the little old lady who comes out of the bingo hall. Does she survive in your minds?

Chris: We had talked about showing more of her post-explosion, as the credits roll, but ultimately didn’t do it. We wanted to keep the film as short as possible and so we figured we’d leave it up to the viewer to decide. But I guess maybe she should survive! She probably does, and just ends up really badly injured.

Kyle: She could probably survive with today’s technology. The question is, did those two cigarette smoking criminals call an ambulance for her? How fast did it get there? Maybe she got lucky and there was still someone inside the bingo hall. I guess we’ll never know.

Want to fill out more spaces on your animation bingo card? Be sure to follow Chris and Kyle on Instagram. If you are interested in trying your hand at traditional character animation, 2D FX or compositing, you can download a 21-day trial for Toon Boom Harmony. 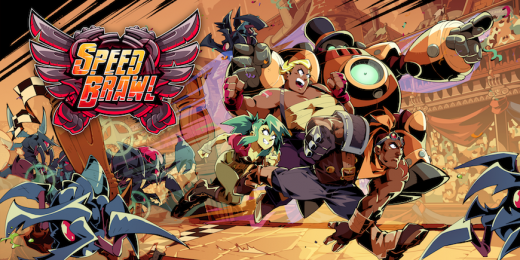 Double Stallion is disrupting the gaming industry with 2D animation 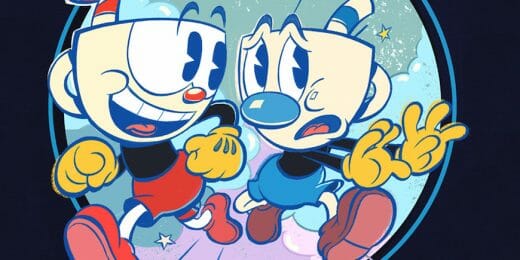 Top Animation News is a weekly column that rounds up the biggest, best and breaking stories from the animation industry. This edition covers July 5 to 12 ...