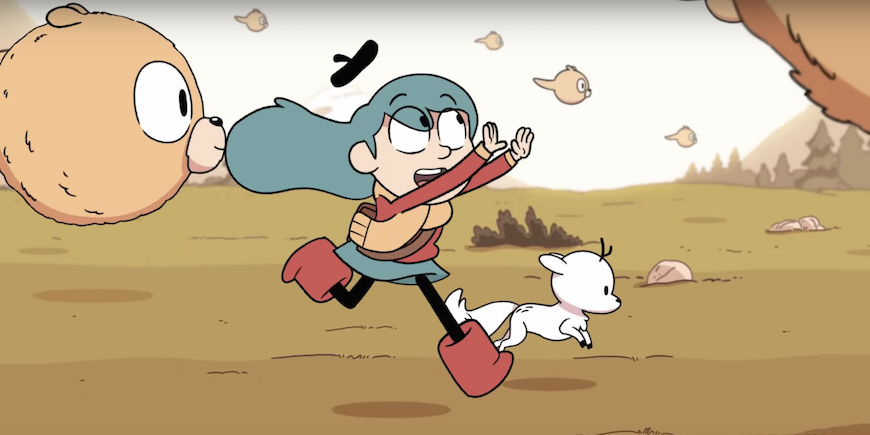 Top Animation News is a weekly column that rounds up the biggest, best and breaking stories from the world of animation. This edition covers September 7 to 14, 2018.

Discover the Rick and Morty Emmy win and why 2D animation is better than 3D for television series on the blog.

3. Netflix’s Hilda gets its fantastical first trailer.
Based on the Eisner Award-winning graphic novel series by Luke Pearson, Hilda is about a fearless blue-haired girl who discovers magical creatures around her town. Premiering September 21, the Netflix series is a co-production between Silvergate Media (UK) and Mercury Filmworks (Canada), who produced the animation for the cartoon using a Toon Boom Harmony pipeline. Andy Coyle served as Hilda’s supervising director.

Watch the Hilda trailer above and explore more on “Cartoon Brew”.

4. Student Academy Awards 2018 winners announced.
The Academy of Motion Picture Arts and Sciences announced the winners of the 45th Student Academy Awards — chosen from 1,582 entries, including live-action and animation, across 278 domestic and 122 international post-secondary institutions. Among those schools taking home prizes were University of Southern California (USC), California Institute of the Arts (CalArts), Ringling College of Art and Design, and MoPA in France. Winning students will be invited to spend a week in Los Angeles engaging with the industry leading up to the awards ceremony on October 11.

Study up on all the Student Academy Awards 2018 winners on “Animation World News”.

5. Apple acquires Wolfwalkers for its streaming service.
As part of its $1 billion video content initiative, Apple has acquired two new family-focused films: documentary The Elephant Queen and animated feature Wolfwalkers. The latter is being produced by Ireland’s Cartoon Saloon — most recently recognized for its critical darling The Breadwinner (pre-production done in Toon Boom Storyboard Pro). Wolfwalkers follows a young girl whose father is a wolf hunter and is “transformed into the very thing her father is tasked to destroy.”

Stream through Apple’s content investments and Wolfwalkers on “Business Insider”.

See the latest Rise of the Teenage Ninja Turtles trailer above and read more on “Flickering Myth”.

Wish to learn more about Wishfart? Find it on “Animation Magazine”.

For more on Ruben Brandt, Collector, head over to “Deadline”.

9. Ads would cost Netflix a quarter of its subscribers.
Research firm Hub has found that 23 percent of Netflix subscribers would leave the streaming giant if it began inserting ads into programming. However, if promotions were coupled with lower monthly fees, only 16 percent of users would cancel. Netflix reached 125 million subscribers in April and saw a record $11.6 billion in revenue in 2017. It is also a huge driving force in the global animation industry, particularly as it seeks to attract new viewers outside the United States.

Venture over to “The Hollywood Reporter” for more on My Neighbor Totoro in China.

In today’s day and age, almost everything can be done online — including learning animation skills! CG Spectrum is an online animation, visual effec ...

The Strange Chores: Don’t be scared to switch from Flash to Harmony

While many animation studios may find the thought of switching from Flash to Toon Boom Harmony daunting, Ludo Studio and 12field Animation’s latest chi ...